TOP GCSE grades are an impressive achievement for students but deathly dull to everyone else. These people don’t care if someone got a 9 or a 1.

Can you plod through an uninspiring job without messing things up constantly? Are you fairly cheap to employ? Yes? Then employers couldn’t care less how well you did in an exam years ago. Maybe take your GCSE grades off your CV and say you’re ‘passionate about spreadsheets’ instead.

This top university says it takes GCSE results into account, but if you’ve been coached to bullshit your way through the entrance exams you’ll be fine. If not, they won’t really be amazed by the 9 you got in humanities and award you a place. London South Bank will though.

Intelligence is sexy, but bringing up old exam results on a date in an attempt to look brainy is tragic. It’s even worse if you talk about your GCSEs because it looks like your life peaked when you were 16 and it’s been downhill ever since. Even though this is true, keep it to yourself.

After they’ve glanced at their results and gone ‘cool’, most GCSE students won’t give them a second thought because even they know they’re not a big deal. They won’t even talk about their grades to their mates because they’re too busy sourcing cheap alcohol and attending the sort of house parties you were never invited to.

University degrees are impressive, and A-Levels grades can be life-changing, but parents don’t really give a toss about GCSE results. They’ll make all the right noises, but really they’re wondering how your triumphant A in film studies will help you get a proper job like corporate accountant. 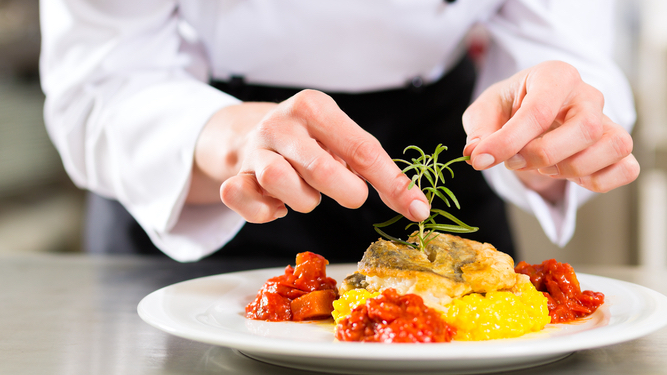 RESTAURANT menus are riddled with pretentious, meaningless bullshit. Here are five examples that will put you right off your food.

Probably the most annoying bollocks they’ll insult your intelligence with. They’re not ‘pommes frites’, they’re chips, and rebranding gravy as ‘jus’ should be punishable by a one-way trip to the guillotine. And they’ve just added another 20 quid to the price for making it sound posher.

A modern disease sweeping through up-their-own-arse restaurants – if it’s £17.50 why not just f**king say so, instead of a ridiculous ‘17.5’, usually in an equally irritating bold italics font to show how hip and clever they are. Wait until the bill arrives then pretend you thought it was in rupees, Gambian dalasi, or another similarly low-value monetary unit.

A pathetically faux attempt to sound authentic, when everyone knows they came frozen in a bag from a factory like all other peas. Push the point by insisting on being told whose garden they came from, and the exact brand of peat-free organic compost they used.

The craze for basically serving a plate with bubbles on the side should surely have died a death by now. Recreate it at home by adding a dollop of Fairy Liquid froth with your steak and chips – it doesn’t matter that it tastes of soap because no one in their right mind would ever touch the frogspawny shit anyway.

Designed to make you feel like you know your sauvignon from your chablis while pushing you in the direction of their most overpriced bottles. Only an idiot will fork out 40 quid for something that’s in the off-licence over the road for a fiver, so just order that delicious wine called ‘house’. You’ll still get ripped off, but at least you’ll have enough money left to get an Uber home.