Get bikes off the road, says motorist who also opposes cycle lanes

A DRIVER who believes cyclists are a menace he should not share a road with is also dead against cycle lanes, he has confirmed.

Roy Hobbs, driver of a Mitsubishi Shogun, admits he does not like driving within 50 yards of a cyclist in case there is an accident and they damage his paintwork.

He said: “Roads are for cars. Simple as. Cycling on them risks their lives and my no-claims bonus.

“They’re too slow and wobbly and unpredictable to share the main carriageway with responsible motorists. I had a hell of a scare the other day when one came out of nowhere when I was FaceTiming the wife.

“But also, I don’t see why we should sacrifice a perfectly good slice of public highway just so they can ride without fear of death or serious injury. I pay road tax.

“So when I’m not uploading dashcam footage of dangerous cyclists and encouraging social media pile-ons, I’m launching a campaign against segregated cycle lanes that could slow my commute by up to 90 seconds.

“And it goes without saying they shouldn’t be on the pavement. The only acceptable places to ride a bike are the Olympics and Belgium.” 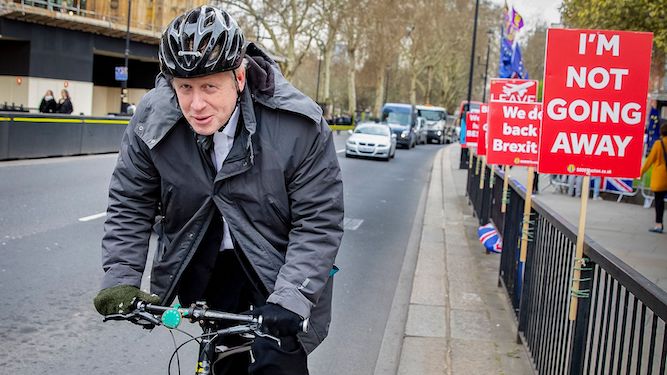 BRITAIN’S prime minister not only looks a bumbling fool while attempting to lead the nation through crisis, but on all other occasions. Here’s how he does it:

Boris Johnson on a bike always brings to mind a sentient potato from a CBeebies show off on its two-wheeled travels. Why can a helmet never sit on this man’s head correctly? Why does he wear a suit while riding, as if changing facilities don’t exist? How has he survived this long?

Whether he’s hurriedly cutting off Chris Whitty for being a Debbie Downer on live TV or posing for a picture with President Trump with his hands on his hips like a girl at the prom, Johnson is a flapping awkward fish in any social situation. Women sleep with him just to make it stop.

There must have been a reason why the Mayor of London was on a zipline holding Union Jacks. But not a soul living can remember why he was up there in those clouds, like a giant toddler after a defecation accident. Nonetheless the image is burned into the retinas of a generation: this is the man that f**ked an entire country.

Most people just have hair. It’s on their head and it suits them fine. Not Johnson. Stringy, white, yellow, tangled, and when challenged by a gust of wind it looks absolutely absurd. He’d be better off wearing a turd as a hat while ignoring questions from Laura Kuenssberg at his next press conference.

When Boris Johnson playing tennis, or rugby, or jogs, he make Theresa May’s dance routine look like a Strictly professionals’ waltz. Clearly hand-eye coordination is considered a socialist affectation at the public schools of this great country.

Thankfully Jennifer Arcuri’s stolen laptop was found by MI5 before its contents could be uploaded to YouTube, so we don’t know for sure. But realistically there’s no doubt whatsoever.