GOD has confirmed that people who use the term ‘Fri-yay’ to celebrate the end of the working week will face the most severe eternal judgement.

The bastardisation of the perfectly functional word ‘Friday’ was condemned by the almighty in a statement released from on high to Grazia magazine, in what experts are calling ‘targeted messaging’.

The deity said: “Fear all ye who, on your social media channels, dare to exclaim joy in internet language that should be the preserve of fools and misguided tweens.

“When the sky darkens over your smart phones, no data allowance shall you have and no mercy shall you know.”

Reverend Roy Hobbs, from Stevenage said: “It is rare for God to specify the weightiness of his judgment outside of his official publications.

“‘Fri-yay’ is clearly a hot button issue for him.”

He spouts exactly the same bollocks in private, GCHQ confirms 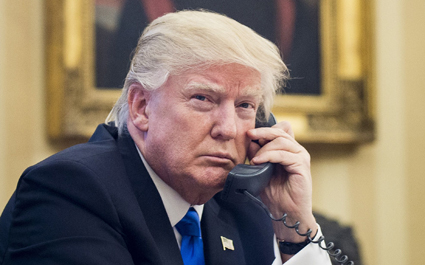 GCHQ HAS confirmed that Donald Trump’s private communications are nothing but the same meaningless bollocks he says in public.

The communications intelligence agency admitted they did listen to the President’s phone calls but only once and they would never waste their time doing it ever again.

A spokesman said: “Come on, it’s not like he’s suddenly all ‘Excellent, the destabilisation of the economy is progressing as planned, now to test China’s nerve with capital controls,’ once nobody’s watching.

“It’s just the usual garbled gabble about Hillary, his Apprentice ratings and the failing New York Times except there’s some bored billionaire on the other end waiting for a gap when he can ask for building permits.

“Our trained operatives, used to deconstructing every nuance of codeword-laden conversations between Al Qaeda and Pakistan’s Inter-Service Intelligence, can’t listen to that shit. They’d lose their minds.

“Plus he makes 70 per cent of calls from the toilet. Come on. Even we have our limits.”