A group of Christians, led by prospective Tory MP Phillippa Stroud, claimed that mumbling in a Church would cause the supernatural evil that causes Barrowman’s insatiable lust for manflesh to leave his body forever.

Despite widespread scepticism throughout the non-mental community, the Christians’ plan started impressively when their prayers manifested themselves as a host of stridently heterosexual, gossamer-winged angels.

But when the heavenly messengers confronted Barrowman coming out of a sauna and showed him some pictures of vaginas, they soon found themselves face to face with the sodomy-loving demon that has possessed the actor’s soul.

Appalled eye-witness, Tom Logan, said: “Mr Barrowman winked at the angels and then bent over and touched his toes.

“At that moment an astonishingly well-built, semi-naked traffic policeman sporting a big brass cock ring popped out of his bottom in what seemed to me to be a blasphemous parody of the virgin birth.

“It belched an evil black cloud of gayness at the angels, which enveloped them and immediately made them confused about their sexuality. They started kissing and licking each other’s firm, sculpted wings in a lascivious way.

“I dont want to go into the rough, hard details about what happened next, but let’s just say that I hope Jesus has stocked up on donut cushions and Germolene.”

He added: “The whole thing was like a much less gay version of Torchwood.” 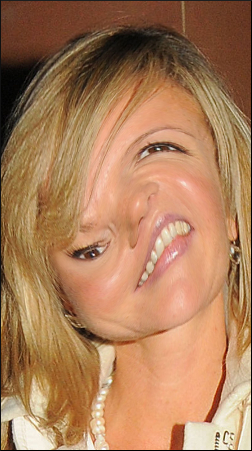 THE sorcery holding Amanda Holden together is wearing off, it emerged yesterday.

Holden, the star of Big Top, the BBC comedy substitute, is a type of golem that was fashioned in the early 1990s from a mixture of horse excrement, saltpetre and frog parts by perverted wizard Les Dennis.

But friends of the Britain Must Be Stopped judge have confirmed the magic is now losing its potency after she was dragged from a fashionable London restaurant last week with foul liquids oozing from her rapidly disintegrating body.

“Les Dennis used his mastery of the black arts to create a sort of Satanic fuck-pet on which he could indulge his unnatural lusts.

“He did consider cancelling his original spell after Amanda had it off with the one from Men Behaving Badly who looks like a hybrid of all three Top Gear presenters.

“He never imagined she would break free of his bewitchment and carve out a career of her own. But that’s ITV for you.”

She added: “She’s now deteriorating at an ever-increasing rate and is, to all intents and purposes, little more than three large buckets of goo and a tupperware box full of lips.”

Britain Must be Stopped fan Roy Hobbs said: “Unless she finds another evil master she could be just a tankful of pestilent ochre liquid before the end of the current series. This could seriously impair her judging abilities.