A LANDLORD has confirmed that he will not allow pets but that a large hole in the roof does not infringe his strict rules.

Wayne Hayes, owner of seven investment properties, enforces a ‘no shoes on carpet’ policy, does not allow toasters  and warns that Blu Tack marks mean the automatic forfeiture of deposits, but is surprisingly lax on the rain coming in.

He said: “My properties are my future, and looking after them is only good sense. Except when it’s not.

“The fact is that we’ve had a quote to fix that roof and it simply isn’t competitive when compared to the longstanding bucket solution we already have, so fixing it doesn’t make sense. You wouldn’t know that because you’re only a tenant.

“I didn’t see you complain during the heatwave when it was providing ventilation. You need to take more responsibility for your own living conditions. Getting it fixed professionally at your own expense would be a step toward that.”

Tenant Tom Booker said: “We moved in here because the rules made it seem like the house would be clean and well looked after.

“Last month I asked him if the shower would ever get fixed and he claimed it’s on the tenancy agreement that I should be a member of a gym.” 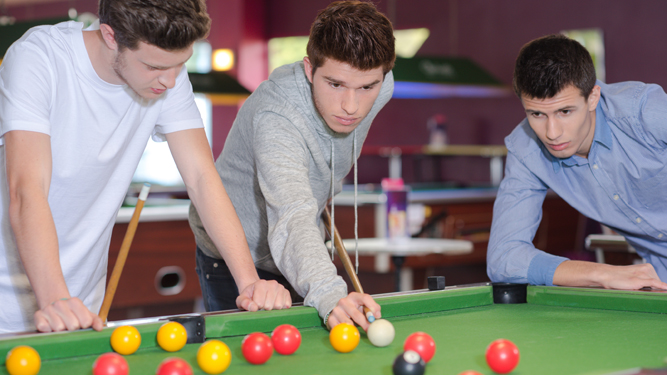 PUB pool tables are at risk of becoming an endangered species, experts have warned.

New research has revealed that pub pool table numbers have plummeted from over two million in 1981 to a mere 485 today.

Professor Henry Brubaker of the Institute for Studies said: “The pool table’s natural habitat, a manky little room at the rear of the pub, is being destroyed by ‘restaurantism’ – the trend where pubs basically become brightly-lit family eateries that serve beer as an afterthought.

“If this continues the pool table could be driven to extinction, or worse still end up being played only in weird American-themed games warehouses where they also do ‘ten-pin bowling’ and ‘nachos’.”

Pub naturalist Susan Traherne owns a breeding pair of pool tables with which she hopes to repopulate the pubs in her local area.

She said: “There can be few sights more majestic than a pool table with fully intact baize and a large stack of 50ps next to the centre pocket.

“Even if everyone disagrees about the actual rules and then has a fight in the car park.”