Large breasted women get it all their own way again

WOMEN with huge breasts were last night getting it all their own way, yet again.

As Marks and Spencer agreed to reduce the cost of its freakishly large bras, normally breasted women said they would be forced to pay unnecessarily high prices to subsidise the over-bosomed.

Elizabeth Gerving, a 32C, said: “I don’t see why they shouldn’t pay a couple of quid more given the extra fabric that’s required to cover their big, daft knockers.”

She added: “We believe bra-pricing should be based on square footage and overall circumference. Some of these monsters can contain up to 12 yards of copper wire.”

Meanwhile, it emerged that M&S chief executive Sir Stuart Rose surrendered after chesty campaigner Becky Williams bent over his desk while wearing a low-cut top that left little to the imagination.

Williams revealed: “I walked into his office, leaned over and said: ‘Mr Rose, I do hope you can help me; you see, I’m a single mum who’s struggling to support her two lovely twins’.

“And then I sort of squeezed them together and went ‘mmmmmmm?’.

“He coughed and spluttered a bit, agreed to reduce the price and then led me out of the room with his hand on my arse. Worked like a charm.”

Retail analyst Tom Logan added: “So, Joanna Lumley is now in command of the Gurkhas, while women are taking to the streets to protest about their bras. Britain seems to be turning into Carry On Up the Khyber” 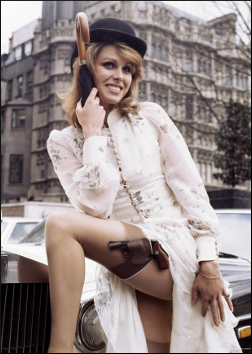 GORDON Brown was prime minister in name only last night as the machinery of state was transferred to New Avengers actress Joanna Lumley.

Ms Lumley has now set up an interim administration in the drawing room of her Chelsea townhouse as she waits for the formality of a general election.

Mr Brown is expected to be finally dragged from office later today after it was revealed he has been paying his own brother £65,000 a year to dress up like a cleaning lady.

It also emerged Jack Straw, the justice secretary, claimed thousands of pounds in council tax for houses that he would quite like to live in, while communities secretary Hazel Blears used public money to buy tiny furniture for her vast network of burrows.

As the government disintegrated like cheap toilet paper, Ms Lumley was huddled in talks with the close-knit group of deadly Gurkhas who carry her about in a chair.

A source said: "One of her first jobs will be to visit every family in the country and tell them how marvellous they are.

"Of course, once we take charge there will be no further need for political parties, or silly little things like elections and parliament. I'm warning you all now – do not fuck with Joanna Lumley."

Meanwhile, the new regime was taking shape last night with the appointment of Sir June Whitfield as Commissioner of the Metropolitan Police, while the leader's former New Avengers co-star Patrick McNee will finally get to take charge of MI5.