A SEMI-MYTHICAL group of troglodyte ravers has been discovered by workmen at Manchester’s legendary Hacienda.

Workmen in the former nightclub were alerted by muffled sounds of uplifting piano house coming from behind a wall.

Further excavation revealed over 140 sealed-in ‘lost’ ravers – who now refer to themselves as the Gurnites and operate a simple barter economy based on drugs, cigarettes and bottled water – making repetitive movements while sucking dummies.

Rave historian Nikki Hollis said: “It’s a long-standing rumour that when the Hacienda closed, a group of truly hardcore dancers decided to wall themselves up in its basement rather than face the demise of dance culture.

“Several hundred baggy-trousered E-heads, along with DJ Graeme Park and a decent sized sound system remained in the bowels of the building, determined that the party would continue forever.

“But until now I just thought it was one of those club culture myths, like ‘the friendly bouncer’.”

Builder Stephen Malley said: “They’d been living on dirty condensation leaking from overhead pipes then bottled and re-sold as ‘mineral water’ at £5 a pop.

“The room stinks of Vicks and there are bug-eyed near-skeletons blowing whistles and shouting ‘fucking come on’. It’s pretty old school in there.”

Plans are now afoot to let the Gurnites continue their decades-long party as a kind of living museum.

Manchester city councillor Tom Logan said: “We hope that school groups can visit the eternal ravers and learn about what youth culture used to be like before it got ruined by corporate sponsorship.

“And also of course the physical and mental effects of getting ‘one more tune’ 300,000 times in a row.” 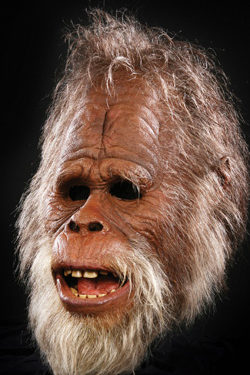 SCIENTISTS are collecting sasquatch DNA in a bid to cut man-ape crime, it has emerged. Police photofit of the notorious 'Harry'

The Institute of Studies has appealed for teeth and hair samples from the elusive hominids, which have been exploiting their anonymity to commit misdemeanours ranging from crampon theft to credit card fraud.

“Local law enforcement seems powerless to stop it. The yetis know this and simply fling their dung at police while making hooting sounds.

“Even more concerning are the number of casualties apparently caused among onlookers to yeti-on-yeti violence.

It is hoped that one of the samples will be from Geoff Shags, a notorious 8-foot gangland yeti based just outside the Tibetan capital of Lhasa. He is believed to be responsible for 90% of the city’s stolen crampon trade.

Geoff Shags has managed to evade arrest for twenty years with the help of his lieutenants Orange Bob and Mickey The Wookie, living from the profits of a protection racket that sees locals pay one live chicken per month to stop their business being trampled to smithereens with the gangs calling card – a trail of mysterious footprints in the snow – left as a warning to others.

The yeti database will be utilised across the globe, including in British Columbia where local police are hoping to smash the ring of crystal meth labs built by bigfoot bikers.