Man who did Spanish GCSE will handle tapas order

A MAN who got a B in GSCE Spanish has taken charge of ordering for his date in La Tasca.

Tom Logan, a 28-year old marketing manager, summoned his server by calling out ‘Exculpa me, senorita’, loudly enough for several other tables to hear and admire his command of the language.

As the waitress approached, Logan turned to his partner, 27-year old Nikki Hollis, and said that he would order for both of them, because he spoke Spanish.

Logan then read off a number of dishes from the menu, making a point of asking about ‘los especiales del dia’, and nodding sagely before ordering ‘dos cervezas’ instead.

He said: “I didn’t want Nikki to feel embarrassed about not being a Spanish speaker, so I stepped up and ordered ‘calamares’, which is like calamari, and ‘patatas bravas’, which means, ‘good potatoes’.

“I also ordered something called ‘bocadillos’, which was different to what I expected, but I explained that Spanish cuisine has a lot of regional variations. I don’t know what Nikki would have done without me here to translate.”

Hollis said: “Everything on the menu has an English description underneath.”

House of Lords told to be either more, or possibly less, democratic 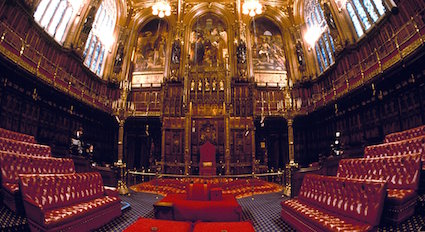 THE government has urged the House of Lords to act less democratically, or possibly more so.

After the upper house voted against taking £1300 away from poor people, the government claimed that unelected politicians disagreeing with something the Conservative Party lied about was morally wrong.

Chancellor George Osborne said: “On the one hand, we promised the quarter of the electorate that actually voted for us that we wouldn’t do this, which doesn’t seem terribly democratic in the first place.

“But having a bunch of people nobody voted for stopping us from doing whatever we like doesn’t seem fair, either.

“It’s all dreadfully complicated, or blindingly simple. One of the two.”

He also stressed that him trying to dodge a Commons debate and the Lords acting entirely within their remit brought up constitutional issues that he had not quite worked out yet.

Labour supporter Wayne Hayes added: “It’s a great day for an institution I think should be abolished and proof that the fatally flawed, undemocratic system works.”