A MAN who asks people to correct him if he was wrong does not in fact wish to be corrected, it has emerged.

Nathan Muir recently declared that wi-fi signals caused a range of serious illnesses, and invited people to correct him if he was mistaken.

However upon being told that wi-fi caused nothing except faster-loading websites, Muir became angry.

Muir responded: “Correct me if I’m wrong, but wi-fi is basically tiny lasers shot directly into our brains.

“The only safe internet is dial-up and people who deny it, correct me if I’m wrong, are paid by the government to spread lies.

“You also shouldn’t have a microwave, because it makes the iron in your blood radioactive. Correct me if I’m wrong.”

Muir’s workmate Donna Sheridan said: “I tried to tell Nathan he was wrong and he lost his temper and said I was a munter. He added that nobody asked for my opinion.”

Muir said: “In the future I’ll just begin every sentence with the words ‘Do not attempt to correct me, because I am right’.”

John Bercow confirms plan to 'take the revolution to Bolivia' 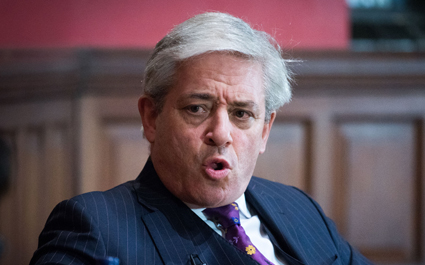 FREEDOM fighter John Bercow has announced plans to launch a revolution in Bolivia.

Speaker Bercow, who recently told Donald Trump he could not come into the Houses of Parliament, is leaving his job to unify his South American brothers and sisters.

He said: “They may kill me but they can never kill the revolution. Better to die on your feet than to live on your knees, and all that palaver.

“I’ve bought some khaki trousers and I can grow a full beard. I look good with a beard too, like a small Kurt Russell.”

Teacher Roy Hobbs said: “John Bercow really does speak for every struggling man, woman and child in this country.

“From the underpaid nurses and the overworked factory workers, to all his mates in Parliament.”

Bercow now looks set to recruit a ragtag bunch of die-hard radicals to take to Bolivia and overthrow what he described as ‘their US-backed puppet government’.