THE war memorial sex woman and her verminous consort are in danger of making sane people think like Daily Mail columnists, it emerged last night.

Tom Logan, an English teacher from Finsbury Park, said: “Before this happened I was opposed to capital punishment for anything. Now there’s like 18 things on my list. Nope, sorry – 19 –  I forgot ‘looking a bit shifty’.”

He added: “Last night I dreamed I was drinking in an idyllic country pub with Richard Littlejohn. We talked at length, agreeing enthusiastically about child molesters, prostitutes and wheelie bins. And then we smashed the windows of a nearby arts centre where some perfectly nice lesbians were doing a play called ‘Africa’s Ovaries’ at my expense.

Librarian Emma Bradford, who owns Dido CDs and recycles jumper fluff, said: “I do wish I could stop myself thinking that she should have her mouth filled with baby rats and he should have his penis put through a mangle.

“Surely there are socio-cultural reasons why someone urinates and performs an unnervingly ambiguous-sounding ‘sex act’ on a war memorial, before telling some old men who fought against Hitler to fuck off.

“My husband thinks there is, but I’m starting to think he’s a mealy-mouthed, turtleneck-wearing gayboy.”

She added: “I’ve just had my hair done a bit like Jan Moir’s. 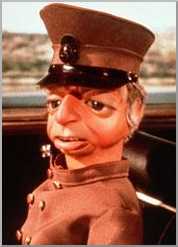 Hi don’t mind tellin’ you hit hain’t heasy gettin’ the night awf, but Lady Penelope bein’ the gracious woman what she is says to me: “If you really must slob around in your ghastly track suit bottoms watching the television then be my guest, Parker. But I insist you switch it awf by 11.30, and don’t forget to leave the back door open so Raul the gardener can get in.”  Hevery night this Raul bloke comes in hand they ‘ave a long meeting where I Raul recommends some new  shrubs for the garden and then M’Lady hagrees with ‘im at the top of ‘er voice for a couple of ‘ours. All very hamicable.

Hafter making dinner for M’Lady, Hi settle down in front of HeastHenders hon BBC1. Hit’s the heveryday tale of simple folk what live in Halbert Square. ‘Blimey’, Hi remember thinking to meself – ‘what’s ‘appened to Roly the Dawg and Big Ron what works in the market?’ Hand me favourite character, Mary the Punk, hain’t nowhere to be seen. Still, that’s what ‘appens when you get one night off hevery 23 years.

Next hup was Sex Hand The City hon Channel 4. This week, the one ‘oo sits around in her knickers typin’ ‘ad it awf with some bloke and then went to a fashion show. Then the old one took ‘er knickers awf and showed her lady parts to this bloke what ‘ad come round to fix ‘er ‘eating. M’Lady would never do such a thing – ‘owever I did once haccidentally drill a hole in the wall of the bathroom and caught sight of ‘er undressed. Hunlike the woman in Sex Hand the City, ‘er front bottom was covered in ‘airs like what a proper lady’s bits hought to be.

After all four of them ‘ad ‘ad it awf for the third time in twenty minutes, they met up for lunch, but didn’t eat hanything and just sat around talkin’ habout doin’ it with hother ladies and what they called ‘hexperimentation’, whatever that is when it’s at ‘ome. The only ‘hexperimentation’ what Hi’ve ever come across is the type my old chum Brains does in ‘is posh laboratory. Hi remember that time ‘e came around to fix M’Lady’s funny-lookin’ plastic thing she keeps in the drawer by ‘er bed. She keeps one in the glove compartment ‘n’ all.

Hanyway, the rest of the night was spent tryin’ to watch me Mad Men boxset over the bleedin’ racket coming from M’Lady’s room. That Raul doesn’t ‘alf know ‘ow to choose the right bush.