PUBS and offices across Britain are bracing themselves for thousands of tortuous conversations about the return of blue Smarties.

Britain's Smartie fans are believed to be tingling with anticipation after food scientists discovered a non-fatal method for producing blue versions of the popular, sugar-coated chocolate sweets.

Following Royal Assent, they are expected to be re-introduced next month. The occasion will be marked with a full day of programmes on Channel Four.

Meanwhile work-based conversations are expected to start with a comparison of the different types of Smarties, with many insisting that the blue ones actually tasted better. However this will quickly be countered with a passionate defence of red and orange Smarties.

After half an hour someone from the legal department is expected to point out that blue is not, in fact, a 'flavour' and that they all taste exactly the same.

The conversation will then break for lunch while everyone goes to WH Smith for a coronation chicken sandwich, a can of Diet Fanta and some Smarties.

The afternoon session will include a comparative study of Smarties, Buttons, Minstrels and M&Ms, also known as 'the American Smarties'.

After a failed attempt to veer the discussion towards Fruit Pastilles, there will be a vague and slightly uncomfortable dialogue about how 'Blue Smarties' is supposed to be street code for some kind of drug, maybe ecstasy or the one used by those perverts who stuff tangerines in their mouths.

The conversation will then continue in the pub, where a light-hearted debate about using a Smartie tube as a telescope will eventually develop into a full-blown fist fight about the size of your cock. 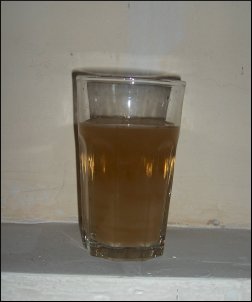 IT is more than two weeks old and is starting to get a bit cloudy, but after topping £75 last night it has become eBay's most expensive glass of piss.

The urine, passed into an Ikea tumbler after an evening of vodka and Red Bull somewhere in the Midlands, has attracted interest from the USA, Europe and Hong Kong.

Urine producer Tom Logan said: "I got up at  four in the morning and I couldn't remember where the toilet was, so I just grabbed a glass out of the sink.

He stressed that people were bidding only for the urine, adding: "I'm going to wash the glass and auction it separately next week. A clean Ikea tumbler in good condition can fetch up to £42."

The previous record holder was a four day-old glass of what used to be Scrumpy Jack, which was sold to a Frenchman for £68 in the run-up to Christmas.

The recent piss-glass frenzy follows a series of record bids, including £88 for half a KitKat and a bit of old pie, £130 for a three year-old Bic pen with about half the ink still in it, and a £325 bid for a 1998 two pence piece.

Logan said he plans to freeze the urine before posting it in a jiffy bag.