Oglers To Stop Denying It

MEN who surreptitiously leer at attractive women must ‘come out’, it was claimed last night.

Research by the Institute for Studies found that unconcealed ‘open ogling’ is marginally less pitiful than trying to pretend there’s something fascinating in a shop window which just happens to be behind some breasts.

Dr Emma Bradford said: “Ogling is a condition which affects all men above the age of about 33, which is when they start to become pathetic.

“Ogling is inevitable. But don’t try to pretend you ‘thought you saw a heron on that roof’ or had momentarily glazed over while ruminating on Proust. It makes it worse.”

‘Metro peepover’ – a stare over a free paper commonly practised on public transport.

‘Car blanche’ – when a male driver feels he can get away with a prolonged lascivious gaze because he might be looking for a turning.

‘The Kestrel’ – where after passing a potential oglee on foot the ogler’s head swivels back through 180 degrees.

Roy Hobbs, a 48-year-old ogler, believes his marriage has vastly improved after he agreed to dispense with his flimsy excuses.

He said: “It’s brought us closer together and I can now openly refer to the living room window as ‘the portal to Boobalonia’.

“I’m allowed 20 minutes of dedicated ogle per day, while my wife has sex with the builder.”

He added: “Try not to hate me. As a middle-aged man I am like Frankenstein’s monster, a thing that corrupts all beauty and is doomed by its very nature to be reviled.

“I deserve your pity. And then perhaps a quick shufti at your fun bundles.” 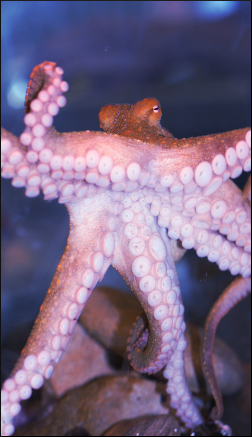 PAUL, the psychic octopus, has been inundated with knickers from thousands of randy women.

After correctly predicting the outcome of some football matches by picking a mussel from a box, the mystical two year-old from Oberhausen in Germany has attracted an army of female fans keen to mate with him at least once.

Helen Archer, from Grantham, said: “He’s got such soulful eyes. I think those are his eyes. No, hang on, those are his testicles.

“He’s got such soulful testicles.”

Nikki Hollis, from Doncaster, said: “He’s changed my life and I want to have his babies. I know we’re not an exact biological match but all my friends say I’m very ugly.”

She added: “I want to rub his ink all over my naked body and feel his slimy legs sucking on my bum. Does that sound weird?”

A unit has now been set up at Oberhausen’s Sea Life Aquarium to sort the underpants by colour, size and freshness.

A spokesman said: “Many of them have obviously given it a lot of thought in a bid to gain some sort of advantage. One woman sent four pairs of dirty knickers that had been stitched together.”

But the spokesman added: “We actually think Paul might be a homosexual octopus. Roughly one of in 10 of them are. He keeps his tank incredibly tidy and after he’s picked the mussel from the box he then wears it as a broach.

“And I don’t think he’s particularly interested in human males, unless they’ve got eight legs. Or perhaps three, if you catch my drift.”

In a good week for molluscs, it has also emerged that male squids are capable of vast erections, leading to dozens of dating websites being forced to scrap their strict ‘no-cephalopods’ rule.

Joanna Kramer, from Hatfield, said: “Women actually have very simple needs – eight arms, an ability to read minds and a cock the size of your arm.”