Parents To Get Buck-Passing Charter

PARENTS are to be given the right to make a formal complaint about the fact they are raising a little shit.

Announcing the strategy, schools secretary Ed Balls said the new 'Home-School Agreements' will signal a step-change in the total abandonment of parental responsibility.

He added: "The agreements, to be signed by all teachers, could be used in disciplinary action against them if the six-foot teenage lunatics in their care keep trying to shove a chair leg into the school janitor.

"It will also give parents the opportunity to complain about other parents who are less strict, diligent and, on the whole, less middle class than they are."

Jack Bradford, whose overbearing mother Gemma cannot wait to start complaining, said: "She's going to be there every five minutes reporting all the psychopaths in my year. But it's not her that's going to be made to eat her own phone, is it?"

Nikki Hollis, a mother-of-at-least-eight, from Doncaster said: "They keep sending me these parenting orders but as I have explained, time and time again, I did not get the best education so it just looks like a lot of squiggles to me.

"The main thing is that after blaming CBeebies and Sunny Delight, I can, at long last, force the school to deal with his violent mood swings, his antique knife collection and his persistent arson."

She added: "By the way, have you seen that stuck-up bitch Gemma Bradford anywhere?" 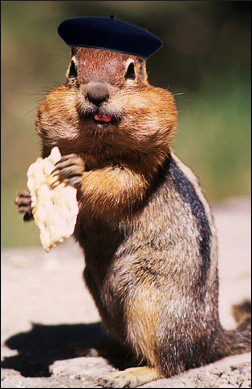 GALLIC chipmunks injected with AIDS and drunk on red wine are pouring through the channel tunnel in what experts believe is exactly the sort of invasion you'd expect from the French.

The rodents, who are expected to arrive at Sunday lunchtime, have been trained to home-in on the smell of roast dinners.

Intelligence expert John Hardy said: "As unsuspecting British families prepare to tuck into their Yorkshire puddings, a horde of continental vermin will pile down the chimney and sink their tiny, disease-ridden, Camembert-stinking teeth into any exposed flesh."

He added: "The reason the French are doing this is because they're the French."

Physically, the creatures are similar to squirrels but can be identified by their berets and the tiny paperback editions of the collected works of Jean-Paul Satre which they carry tucked under one arm.

Brigadier General Martin Stewart: said: "In 1976 they tried something similar using underwater beavers with hepatitis, but we laid a series of depth charges which brought them to the surface at which we point we machine-gunned them.

"My advice to families is to stay indoors and don't buy a Renault."

Intelligence sources claim Britain attempted a counter-attack, in the wake of the beaver invasion, involving dyspeptic bulldogs being parachuted into the mountains near Cannes.

However, the dogs are said to have been diverted by the easy availability of cheap foie gras, coupled with 300 days of sunshine a year and excellent public services.

It is believed their descendants still run a charming gite complex just outside Avignon.