POLICE forces across the UK are looking forward to cracking dozens of middle class skulls this summer, a senior officer said yesterday.

Superintendent Tom Logan said the recession could provoke thousands of law-abiding professionals into violent unrest giving his officers a once in a lifetime chance to get in amongst them with nightsticks.

He added: "Economic downturn means people you would not normally associate with civil unrest taking their anger on to the streets. It's a very special time in a policeman's life.

"A lot of my lads were too young for the poll tax riots and so this could be their only chance to knock the absolute living shit out of a Guardian reader.

"Ideally it'll be the sort of people who have fancy dinner parties, with their Le Creuset pots and their Cloudy Bay and their nonce friends, passing round the marijuana cigarettes and raising money for Hezbollah.

Supt Logan stressed that anyone who is thinking about protesting this summer should not be put off, adding: "Come to London. Have a day out. Throw bricks, deface banks with your tins of Farrow and Ball paint and above all, when the policemen charge at you, stand your ground.

"And when six of my lads are dragging you by the hood of your Fat Face cagoule into the back of a van, please do struggle a bit, thereby giving them reasonable cause to boot you squarely in the kidneys. They love that." 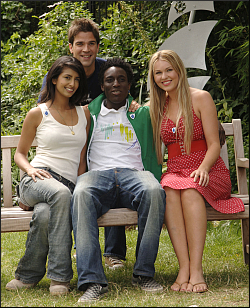 PARENTS who complained about a one-armed childrens' TV presenter will have their own very special corner of Hell, Satan confirmed last night.

Lucifer's minions are sweeping out a disused basement room that will be kitted out to look like the Teletubbies house and then filled ankle deep with a corrosive mixture of children's vomit, gerbil excrement and out of date Sunny Delight.

On arrival all parents who objected to Cerrie Burnell's appointment will be driven into the room by fiery horned demons who will beat them continuously with prosthetic limbs studded with the shards from a broken Thomas the Tank Engine mug.

A spokesman for Beelzebub said: "They will then be slowly evicerated by some fairly large scorpions while being forced to watch the Josie Jump song from Balamory on a never-ending loop."

He added: "These people seem to think a one-armed young lady appearing momentarily inside a flickering box in their living room is the very stuff of nightmares. Let's just say we're reasonably confident we can prove them wrong."

Bill McKay, a parent from Northampton, said: "I turned on the Bedtime Hour expecting to see it hosted by some incredibly hot babe with a dodgy past in home-made pornography.

"Instead I got something that made my children cry and failed to give me an erection.

"I suppose this was a perfect opportunity to talk to my children about disability but I felt it would be more useful to email the BBC and try to put an end to this young woman's career."