ENGLISH pubs will become the worst places in the world later today, it has been claimed.

According to Institute for Studies data, the fact that England cannot manoeuvre a football will fully re-establish itself in the brain stems of the assembled beer processing units after 30 minutes of play. At this point the average pub will become slightly less pleasant than a piss bomb exploding in a skip full of rusty forks.

Landlord Wayne Hayes said: There must be some pleasanter way of bringing in punters than by screening football. Perhaps some sort of stage show involving my wife pleasuring terriers.

The drunken jeering, the misplaced sense of entitlement and the pervading fug of prejudice is like being in the House of Lords with a fruit machine in the corner.

Meanwhile, most England fans have said that in the extremely unlikely event they win Euro 2012, it will not compensate for having watched hours of Adrian Chiless face.

The scrotum-alike has already had to present matches from inside a perspex case to foil Roy Keanes repeated attempts to beat him to death with his own ribs. Now many viewers have started exploring alternative Chiles-free pursuits.

Football fan Roy Hobbs said: Rather than hearing a ballbag witter on in what appears to be the beer garden of a fun pub, Ive started listening to opera. Its actually quite, quite beautiful.

“A fiery disk plunging into a shimmering horizon and painting the evening sky a palette of rich titian and crimson makes you realise theres more to life than Adrian Chiles making puns about foreigners. 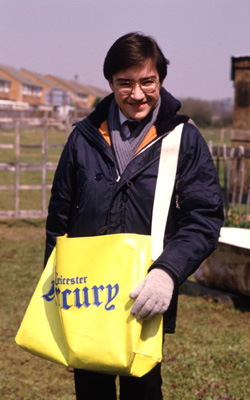 THE latest Adrian Mole book sees the main character exacting bloody revenge on the world for his years of comic misfortune, it has emerged.

In Adrian Mole: Payback Time, which is published this week, Adrian – now an embittered 45¾ year-old loner and still obsessed with the size of his thing – hunts down everyone who has ever crossed him.

Author Sue Townsend said: Frankly it was time Adrian got his own back on Sharon Bott for humiliating him at the roller disco.

She totally deserves it when Adrian douses her in petrol then burns her to death in a disused factory.

The novel also resolves the doomed romance between Adrian and Pandora Braithwaite when Adrian directs detectives to a box containing her severed head.

Townsend said: Every man has his breaking point, so its only natural that Adrian should want revenge on the school bully Barry Kent, who gets fed into a wood chipper, or the bad-tempered head teacher Mr Scruton, whose corpse Adrian defiles in the most vile fashion imaginable.

Sunday Times book critic Eleanor Shaw said: The original novel was a warm and witty portrayal of adolescence, and also a sharp satire on the zeitgeist of the 1980s.

However this one pisses on it, especially the bit where Adrian tracks down Brainbox Henderson, who briefly went out with Pandora in the first book, and stuffs a calculator up his arse until he ruptures.