Regional businessman get their own acting school

A PROVINCIAL businessman acting school is grooming the next generation of training video and local cinema advert stars.

The Jeff Brown School Of Performing Arts offers guidance on everything from walking stiffly toward the camera while staring directly down the lens to wearing incredible wigs that look almost sentient.

Carlisle garden centre owner Wayne Hayes said: “I wanted to work on pretending to look at a laptop while accepting an empty cup of tea from my ‘PA’ who is actually my daughter.

“The tutors asked me to consider my motivation, which in this case was wanting a cup of tea.

“Once I’m really proficient my graduation piece will be waving a wad of notes whilst pointing at some compost and holding the pose for an awkward three seconds before the ad ends.”

Research shows that customers assume anyone in a small budget ad that doesn’t look like they’re appearing in a ransom video must be a professional actor.

Roy Hobbs, head of a firm of Croydon barristers, said: “For twenty years I’ve used my easy charm and good looks to host Rotary Club fundraisers and conduct a string of affairs with interns.”

“But thanks to the Jeff Brown school whenever a camera is pointed at me now, I look like I’ve been caught with my penis in the family pet.” 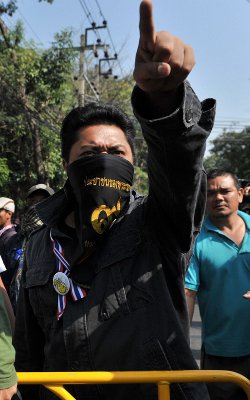 BRITISH people have been wondering why people in Thailand are so into voting.

Pitched battles between opposition supporters and police have made the entire process of democracy look like it really matters to ordinary people, rather than being some egghead bullshit.

Tom Logan, from Reading, said: When I saw masked thugs at polling stations, I couldnt help think of when I went to vote.

Two old ladies sat at a formica desk in the empty hall of a closed primary school handing out pencils.

“I went in a cubicle, realised it felt a bit too much like an exam, and then took the pencil.

“That was over a decade ago, I haven’t bothered going back. Despite the free pencil.”

Political science lecturer Dr Mary Fisher said: The Thai electorate is trying to overturn massive government corruption which sees almost all the money raised in taxation appropriated by a handful of billionaires.

Over here, in contrast, were used to it.

In the UK we only vote when it could actually make a difference, for example in deciding the new limited-edition Kit Kat Chunky flavour.”