TRIBUTES are being paid to Sir Richard Branson this morning after the Virgin Atlantic boss died of laughter.

Sir Richard was discovered at his West London home early today, slumped over on the sofa with a huge smile on his face and the television stuck on Sky News.

Staff at his Holland Park mansion said they heard him banging on the floor shouting, 'stop, stop, I can't take any more!' before he let out one final burst of uncontrollable laughter.

A company spokesman said: "Something must have set him off yesterday afternoon. I called him at around 4pm and he could hardly speak. At one point I think I heard him say he'd pissed himself.

"It's a shame because he would probably have wanted to go in a balloon accident or some other self-promotional activity."

Meanwhile Heathrow has hailed the catastrophic opening of its new terminal five as an 80% improvement on a normal day at terminals one, two, three and four.

British Airways passengers had to wait five hours to collect their bags, compared to the usual 12, and only 300,000 pieces of luggage went missing over the day.

Airport boss Bill McKay said an 'outstanding' first 24 hours had been marred only by a small riot and a handful of isolated knife fights.

He added: "It did turn a bit nasty when someone pointed out the terminal was just a big shed that wasn't actually connected to any departure gates. Still, thank God for Alsatians, eh?"

'Entente Amicale' Called Off After Bastard French Win In Paris 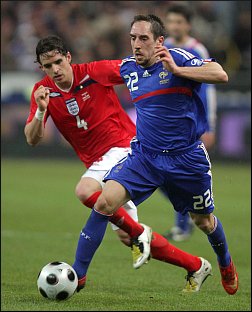 PRESIDENT Nicolas Sarkozy was thrown out of Britain last night and told to stick his Anglo-French brotherhood up his arse, after England lost 1-0 to France.

The president, and his unbelievably hot wife, had earlier received a standing ovation at the Palace of Westminster as members of the Commons and the Lords hailed his new approach to cross-Channel relations and his wife's magnificent legs.

Later, at Windsor Castle, the Queen congratulated the President while the Duke of Edinburgh performed his official duty of grabbing Madame Sarkozy around the knees, before being dragged away by the Grenadier Guards.

But the new spirit of friendship was destroyed just hours later as France eased to victory and the Sarkozys were ordered from their beds and shoved onto the late bus to Folkestone.

Foreign secretary David Milliband said: "Don't tell me you want be my best friend and then send my keeper the wrong way, you greasy shit.

"Typical bastard French isn't it? Coming over here with their just unbelievably sexy wives, giving it the 'kissy-kissy' and the 'ooh la la'.

"If you are going to rub our noses in your wife's exquisite chest, you could at least let us win the actual game."

Mr Milliband added: "I'm not too chuffed with the bastard Italians either."