THE mysterious individual who single-handedly sustained the market for pewter dragon statuettes is being held at a secure laboratory.

A team from the Institute for Studies had been in pursuit of Britain’s elusive fantasy trinket buyer for over a decade, finally bagging their specimen after setting up a fake shop called Gifts of Olde Avalon in Shrewsbury.

Professor Henry Brubaker said: “For years we’ve looked at those little statues of dragons holding pretend crystals, Merlin snow-globes and leather pendants with elves painted on them and wondered – who the fuck buys this?

“The answer is a 51-year-old spinster from Trowbridge called Emma Bradford who lives in a terraced house with six cats and 146 dream catchers.”

Bradford’s extensive collection of poor quality sub-Tolkien fancies includes a 3D painting of a Balrog in a limited edition PVC frame, a copper-plated Excalibur and a candle in the shape of an orc’s pronged penis.

There is also an airbrushed painting entitled Werewolf Moon which is presented on a leather scroll and apparently cost £20.

She said: “It’s just my unique personal taste. Now please let me out of this net and stop taking samples of my hair and skin.

“I’ll have you know I’m a practising Wiccan and could turn you all into chairs.” 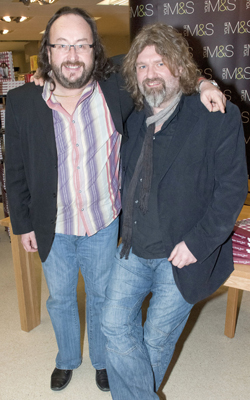 JOVIAL television bike gang members David Myers and Simon King have confessed to extensive criminal activities after multiple shootings at the recording of their latest series.

Violence erupted at the filming of the popular BBC show Mums Know Best when six members of the Death’s Head Moths motorcycle gang rode into the marquee where a crumpet-making competition hosted by Myers and King was reaching its culmination.

Although Myers and King are best known as the upbeat, pie-loving Hairy Bikers, it has since been revealed that they simultaneously operated in the motorcycle underworld under aliases including Graves and Barger, The Motherfuckers and Skull Brothers.

Geordie Simon King said: “The cookery thing started after we found that the best way to transport cocaine, pistols and stolen pharmaceuticals around the country was by baking them into pies.

“We’d strap stacks of them to our bikes, and if we got pulled by the police we’d simply hand them the top pie, known as ‘the empty’ because it didn’t have any drugs in.

“When the television stuff kicked off, it became the perfect front for increasingly large-scale criminal operations. On the last series of Mums Know Best we had ‘mini-haggises’ that were actually grenades, and chicken thighs stuffed full of dexedrine.

“But when innocent people started dying it all had to come to an end, because we bikers – although ruthless if crossed – live by a strict code of honour.”