THE Rochester house covered in England flags is a Marxist commune, it has emerged.

The lesbian collective are furious at Labour MP Emily Thornberry, who resigned after tweeting a picture of the house yesterday, for misunderstanding their abstract art installation.

Chairperson Nikki Hollis said: “White is the Chinese colour symbolising death and the red represents menstruation, made into a cross as a figurative prison for womanhood.

“The van was there because we’re all ready to tour some of the UK’s most deprived areas working with women to create similar tapestries bringing out their internalised misogyny for the first time.

“We hung out three of them to make it incredibly clear. I guess some people are just bigots.”

Rochester residents will discuss the issue at Sunday’s Celebrating Diversity Fun Day, where more than 15,000 people will gather barefoot to meditate and share simple vegan meals.

Hollis said: “Ms Thornberry, and the life traumas she has suffered that cause her to judge others based on surface appearances, will be in our non-denominational prayers.” 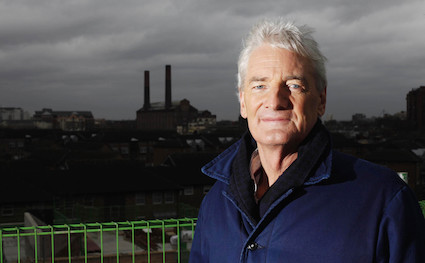 JAMES Dyson has been told to shut up and invent a toaster that is not a useless bag of piss.

The vacuum cleaner man continues to make products that incrementally improve on stuff that already works when he could have been sorting out the toaster situation.

Martin Bishop, a toaster owner from Stevenage, said: “It’s never the same twice. Ever. I think it might be artificially stupid. I hate it more than Nazis.

“Please Mr Dyson, do your magic with a toaster so I can smash this pile of bollocks to pieces with an iron bar.”

Karen Davis, from Peterborough, added: “Sometimes it toasts the way I want it to, but it takes absolutely fucking ages. But mostly I have to monitor it constantly, popping the bread up to check its progress three or four times. And I just stand there and take it, like an arsehole.

“I swear to god, if I find the creature who designed it…”

Jane Thompson, from Hatfield, said: “I want a toaster that just toasts bread according to my exact specifications, quickly and efficiently. Rather than this hellish symphony of smoke and tears that makes me want to claw at my wretched face and then set fire to everything in the world.