Tall man thinks it's an achievement

A TALL man behaves as if his above-average height is some sort of achievement, people have noticed.

Six-foot-three sales executive Stephen Malley looks pleased and smug when surrounded by shorter people and misses no opportunity to ‘subtly’ draw attention to his height.

Colleague Nikki Hollis said: “Stephen says things like ‘Yeah, I’m the tall guy’ to people who hadn’t mentioned it and offers to get things for you that aren’t hard to reach.

“I’ve also noticed he always stands in an erect position to make the most of his height. And if he thinks no one’s looking you can see him looking down on everyone with a distinct sneer.

“He’s not even that tall. I’d love to see the expression on his face if John Cleese and Dave Bautista walked into the office, but I have to admit that’s unlikely to happen.”

Malley’s ex-girlfriend Emma Bradford said: “At first I thought Steve had a sense of humour. Now I realise he’s being serious when he exaggeratedly bends down to go through doorways.

“I can’t believe he gets an ego trip out of something genetically determined. But then he is a wanker in most other respects so maybe it’s fair enough.”

Dicking around with musical instruments 'most annoying sound in world' 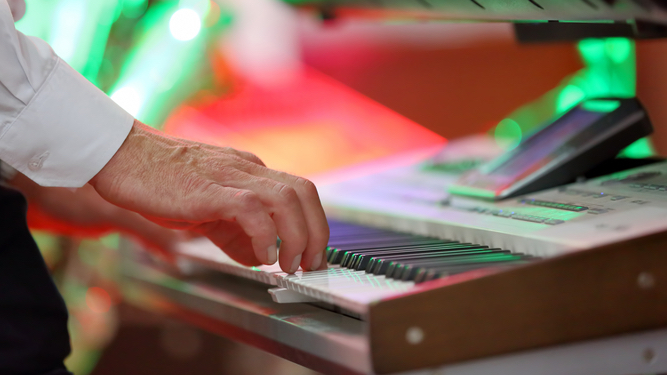 SOMEONE tinkering with a musical instrument but not actually playing it is the most annoying sound known to humans, research has confirmed.

The Institute for Studies found that tuneless fiddling with a guitar, piano or any other instrument instantly leads to agitation, depression and finally murderous rage.

Professor Henry Brubaker said: “Many musicians, such as acoustic guitar players, are dicks, but people who noodle around making random sounds are the real bastards.

“They could be fiddling with anything from a keyboard to a bassoon and anyone nearby will immediately get a primal urge to beat them to death with it like the apes in 2001.

“If you can’t play an instrument, stop arsing around with it. And if you can, for God’s sake don’t make anyone sit in embarrassed awkwardness listening to your own songs.

“If you find yourself with a non-musician molesting an instrument, don’t do anything to suggest you’re interested in what they’re doing and take the first opportunity to run away.”

Mum-of-two Emma Bradford said: “I love plinking away on our piano, even though I can’t play it. But weirdly when my daughter does it it’s the most annoying fucking thing I’ve ever heard.”