HAVE you noticed that the Daily Mail keeps using certain phrases to try and convince you they’re a real thing? Here’s some of their irritating linguistic programming:

Militant? Yes. Disruptive? Yes. A mob? No, a mob does things like dragging people out of their homes and lynching them. If you’ve got the slightest sense of perspective this ‘mob’ is ‘a small group of fairly determined green protesters’. They’re not coming at you with a noose because they’re all vegetarians and probably feel bad about hurting Linda McCartney sausages.

There sure are a lot of mobs terrorising Mail readers at the moment. The ‘woke mob’ is usually a bunch of students complaining about imperialism or JK Rowling. Who universities and publishers could just ignore. They wouldn’t be chasing Frankenstein’s monster with pitchforks, they’d be campaigning for safe spaces for the stitched-together corpse abomination community.

A cabal of teachers, unions and local government staff who try to undermine Tory education policy at every turn. Yes, let’s all believe in a daft conspiracy theory invented by noted twat Michael Gove. Ignores the fact that (A) teachers may have perfectly legitimate grievances, and (B) they’re too busy getting Zoey another pen because she deliberately keeps losing hers and stopping Callum thumping Jaycen for being a ‘batty boy’.

A little-used phrase now, possibly because it was popularised by Richard Nixon in a speech 53 years ago. Although that’s nothing in Daily Mail terms, where WW2 practically happened last week. The original meaning of ‘people who quietly hold moderate views’ is also lost. The Mail’s silent majority is better described as: bigoted suburban fascists who hate everyone and everything and probably think the birds on their back lawn are scrounging bastards.

Piling on the PDAs

There seems to be a rule that any story about celebrity couples must include the phrase ‘piling on the PDAs’ (public displays of affection). Presumably if a reporter instead writes ‘kissed several times’ they’re taken to the basement to have their fingers broken. Of course there’d be far fewer embarrassing PDAs if the Mail’s paparazzi weren’t constantly stalking Z-list slebs.

Marxism is a specific political philosophy concerned with class struggle and replacing capitalism. The Mail uses it more in the sense of ‘any lefty bastard’. It’s assumed that all Marxists do evil things, from setting up gulags to not loving proper comedy like Dad’s Army. Thus Jeremy Corbyn is a Marxist. Jon Snow probably qualifies. The Mail has even referred to ’Marxist teachers’. Yes, PE teachers are notorious for spending their free periods arguing about dialectical materialism.

Mail readers are probably more familiar with Nineteen Eighty-Four than any other book. The only problem is they don’t understand it. By now they must think there are actual police forces with titles like the Greater Manchester Thought Constabulary, all waiting to kick your door in at 3am because you haven’t ‘taken the knee’ recently.

This isn't a fine, it's just a work-related letter, claims Johnson 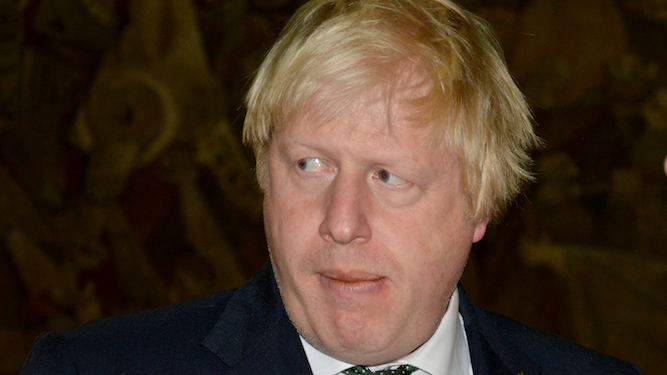 BORIS Johnson is claiming a letter that is clearly a fine to any sane person is actually something entirely different and work-related.

The prime minister has decided his ‘partygate’ ploy of pretending he thought a party was actually a work event was worth another shot, despite it being unconvincing and pathetic.

Johnson told reporters: “Yes, the message says ‘FINE’, but it’s actually a message from Michael Gove saying ‘everything is FINE’. I can see how people might get confused.

“It’s actually a work thing about buying a new computer for Downing Street. That’s very boring so you won’t want to be looking at it in any detail. Let’s put it away now and talk about how I saved Ukraine the other day.”

“I doubt one more lie matters to Boris. It’s an insult to voters’ intelligence, or maybe they’re just thick and it’s not.”

Johnson supporter Norman Steele said: “It’s obviously a work letter, and anyway I’ve decided that if Boris does it, lying is a really good laugh. Would you prefer Corbyn or something? I’d go for a pint with Bozza.

“All of which is a painfully roundabout way of saying I like Brexit and send the immigrants back.”