WITH Wikipedia laid low by chronic indignation, the Daily Mash has unselfishly stepped into the breach with a list of today’s Top Ten Must-Have facts:

1. Benedict Cumberbatch was born Cumberdick Bendybatch. He changed it because he thought it sounded weird.

2. The Costa Concordia is a huge metaphor for Italy because it formed an alliance with Hitler during the second world war and has won four World Cups.

3. Humans are not designed to understand the phrase ‘complex carbohydrates’.

5. The Eurozone crisis has already been solved but Brussels Eurocrats don’t want you to know.

6. In today’s ultra-competitive jobs market, the best way to secure long term, lucrative employment is to tell the interviewer how much you enjoy uploading quirky cat photographs to icanhascheezburger and using the word ‘c*nt’ on Facebook during office hours.

7. Goldman Sachs owns your house and at some point they are going to want it back.

9. Sherlock Holmes faked his death by hiring a BBC film crew and two of the people who write Doctor Who.

10. This article is our intellectual property, if you steal it we will RUIN you. 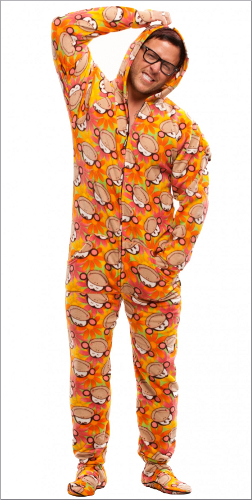 THE availability of one-piece romper suits for adult males proves that men are over, it has been claimed.

Experts believe that the man-sized babygrow or ‘onesie’ is the concluding event in the history of human masculinity.

Evolutionary biologist Dr Emma Bradford said: “The modern world’s diminished need for physical strength has left men struggling to adjust. Or even, it seems, to put on a pair of proper trousers.

“Penises may exist for another couple of generations, but thanks to the onesie the concept of ‘man’ is officially dead.”

She added: “Technological advances mean that is in now pretty much possible to make a baby from silicone.

Human male activities prior to dressing as giant infants include ekeing a living from the soil with bare, bleeding hands, forging tools from white-hot metal and fighting vagabonds to the death with swords.

Historian Nikki Hollis said: “As recently as 1946 it was not uncommon for men to do brave, dangerous things.