Mrs Gerving, a retired head teacher from Guildford, has been hailed as a hero since beating a group of masked robbers to the floor with her handbag in a brutal street battle because she thought they were afro-Caribbean.

In an interview with Racist Nan magazine, she said: “I saw a group of men with their faces covered, robbing a shop. My first thought was, ‘darkies up to no good as usual – I must launch myself at them’.

“The police said after they caught them and took the masks off they discovered they weren’t coloured, but I don’t believe them.

“They can make themselves look white. It’s all done with computers.”

She added: “It’s about time we stood up to these foreigners. They’re as bad as people who serve tea in polystyrene cups.”

Plumber Tom Logan, from Swindon, said: “I am fed up with crime and as a Top Gear viewer I’m very comfortable with semi-ironic racism, which must mean that I think Mrs Gerving is a national treasure.

“She actually reminds me of The Punisher but with varifocals and a colostomy bag.”

Pc Stephen Malley said: “As a policeman I am naturally torn. On the one hand I don’t think members of the public should be apprehending  criminals, but on the other I am really quite racist.

“I’ll probably need to go on a course.” 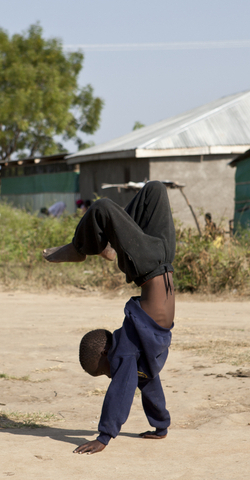 THE world’s newest nation celebrated its birth last night with a 4-1 victory over Scotland.

The match was staged just hours after referendum results confirmed South Sudan’s status as the latest country to be able take apart the Scottish back four with a series of textbook passing moves.

The new nation’s provisional government staged the event insisting a football match against Scotland would give the fledgling state a vital confidence boost.

The hastily formed South Sudanese Football Association then spent more than an hour finding out what football was before assembling a squad of seven players, five of whom had a full set of feet.

An SSFA spokesman said: “We were slightly disappointed in the scoreline and we need to do more to convert our chances. A 4-1 victory over Scotland should not give our next opponents a false sense of security.”

Scotland coach Craig Levein said: “There are no minnows in world football anymore, particularly the ones that are only 15 minutes old and think a football may be some sort of landmine.”

He added: “That said, there were some solid performances out there tonight and we did score a very good goal.”

Football historians say the result will stand alongside some of the greatest Scottish defeats including those to countries that don’t even exist such as Ruritania, Lilliput and the People’s Republic of Marzipanistan.