THE word ‘bigot’, introduced into the English language in the late 16th Century, lost all meaning shorty after 11pm last night, it has been confirmed. Word managers at the Oxford English Dictionary said ‘bigot’ became officially meaningless when the one millionth person on Twitter used it to describe an old lady from Rochdale who used the word ‘immigrants’.

Tom Logan, the OED’s deputy director of A to C, said: “Meaning-wise, ‘bigot’ has been on shaky ground for quite some time and, like most bad things, it’s entirely the fault of The Guardian.

“Meanwhile, anyone who hasn’t read a book about the right-wing media conspiracy against Hezbollah is the absolute worst kind of bigot and of course they now think I’m an appalling bigot for pointing that out.

“But perhaps most damning of all is that these are the sort of twisted, ruined people who will endure at least 15 minutes of The Kumars at Number 42 simply to prove that everyone else is intellectually evil.”

Meanwhile, Professor Henry Brubaker of the Institute for Studies, stressed the use of the word ‘immigrants’ by 66 year-old grandmother Gillian Duffy would have been bigoted it had been followed by ‘are not nice people’, but it wasn’t.

“Mrs Duffy said ‘You can’t say anything about immigrants… all these eastern Europeans are coming in, where are they flocking from?’. So let’s just examine that one section at a time.

“Now, the first bit is factually correct. You can’t say anything about immigrants and I’m fairly confident that we all understand that now.

“The second bit is a little tricky because it does seem to answer its own question – which Guardian readers have pointed out many, many, many times. But of course what she really meant was ‘I’m just a normal old lady and I don’t really know why any of this is happening’.

“But Guardian readers should continue to patronise her anyway because that just impresses the grade-A shite out of everyone.”

Tom Logan added: “The really wonderful thing is that the original meaning of bigot was ‘sanctimonious hypocrite’, so in the next edition of the Oxford English Dictionary we’re going to go back to our etymological roots and adjacent to the word ‘bigot’ it will simply say ‘noun – a reader of The Guardian‘. 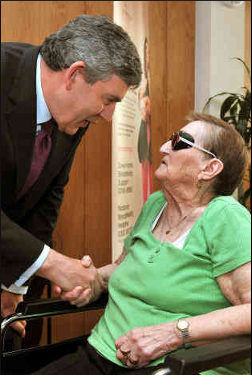 GORDON Brown today accused the Tories of planning to scrap benefits for spiteful, racist old bitches who can freeze to death for all he cares. 'It's okay, you can shake my hand, I'm not a Pakistani'

The prime minister told a group of manky, hate-filled sows in some stinking residential home that David Cameron would take away their free TV licence so they wouldn’t be able to complain about ‘darkies’ when they’re watching the news.

He said: “The Tories will also abolish the winter fuel payment so you’ll end up in the hospital with pneumonia giving funny looks to the Indian doctor who’s just saved your life you rancid, ungrateful old shits.

“And he’ll make you pay for the bus. Imagine that – having to pay 50p so you can go into town and meet your decrepit Nazi friends and then sit there drinking tea and comparing notes about which ethnic minority you’d like to string up first.

“And he’ll abolish free eye tests. What will you do then? Without your ugly little glasses you’ll have no idea who you’re supposed to hate. Let’s just hope your hearing doesn’t go as well, so you can at least still judge people by their mumbo-jumbo accents.”

The prime minister added: “Anyway, I hope I can count on your vote next Thursday and who knows, maybe you’ll die shortly afterwards and do us all a favour. Fuck you.”

Senior Labour figures have expressed unease at Mr Brown’s new tactic but there are suggestions that unbridled verbal assaults on elderly widows could strengthen the party’s position with the thousands of educated, middle class voters who are embarrassed by their own parents.

One Labour source said: “We’ll have to wait for the overnight numbers, but if it’s working then from now until polling day we’ll be targeting defenceless old ladies, preferably wheelchair-bound after a violent robbery.

“Perhaps he could hit one of them in the face with a spanner.”