KID Nation, the US reality TV show, has formed an army and declared war on Disneyland.

Tanks from the youngsters' first mechanised battalion smashed through the polystyrene defences at Annaheim at dawn today and by early morning were besieging the Fairytale Castle.

Eyewitnesses described scenes of horror as at least seven poorly armed dwarves were gunned down while trying desperately to defend themselves with shovels.

Mickey and Minnie Mouse were both beheaded after being lured into a giant cheese-ridden trap, while Daffy Duck was killed silently by a Kid Nation CIA 'wet team'.

But amidst the sound of gunfire and grenades, local children cheered as invading tanks pulled down the 'you have to be this tall to ride this ride' sign.

Bob Diggits of CNN said the fighting was the most vicious he had seen in 20 years of covering conflict and raising a family of five squabbling boys.

“I saw Huey, Duey and Louie being strung upside down by their little webbed feet. Pluto was hung with his own lead. Cruella De Vil was fed to a pack of hungry dogs. I saw Snow White being forced to make juice.”

President Billy Timms, 12, said the invasion was justified under international law, insisting his troops would be greeted as liberators.

However, left-wing, pro-Disney activist Noam Chomsky said the invasion was about securing free access to the Twilight Zone Tower of Terror. “This is about cheap thrills and hubris,” he added.

Former Secretary of State Colin Powell stressed the need for a robust post-invasion strategy to prevent sectarian civil war between the parade performers and the majority marketing department. 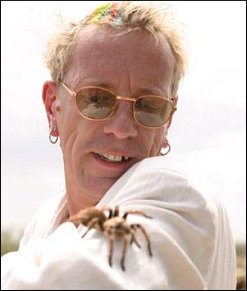 FORMER Sex Pistols frontman Johnny Rotten has launched a scathing attack on Discovery Channel presenter John Lydon describing, him as "a washed-out, cynical old bastard who was only ever interested in the money".

Rotten is urging middle-aged men across the UK to boycott the band's anniversary reunion, 30 years after his dirty mouth almost brought down the Callaghan government.

The punk icon said: "Appearing on I'm a Celebrity Get Me Out of Here was exactly the sort of thing one would expect from such a self-regarding charlatan.

"But to then try and milk the Sex Pistols' anniversary for all its worth – it makes me want to spit all over a group of Chelsea Pensioners and denigrate the pathetic, pointless sacrifices they made for this post-imperial shithole of a country."

Lydon, star of Discovery Channel's Megabugs, dismissed the attacks, saying: "When I'm up on stage with Paul Cook, Glen Matlock and Steve Jones and the crowd is baying for more I think to myself, 'soon my Le Creuset collection will be complete'."

He added: "I should really invite Prince Charles, Billy Connolly and their delightful partners over for a Mediterranean supper. Lovely."