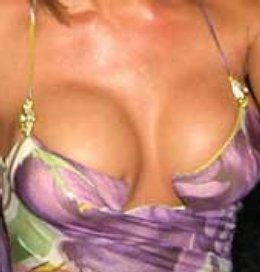 VICTORIA Beckham's breasts have become Scientologists as part of a daring strategy to carve out an independent life for themselves in Los Angeles.

The chests were signed up to the cult religion by celebrity friends Tom Cruise and Katie Holmes who told them it would give their career the lift needed to make it in LA.

The breasts have also appointed an agent after accusing Victoria's press aide of getting them "too much coverage, and not enough showage."

Biz Binkel, a celebrity gossip monger, 68, said the breasts had hit the ground running since arriving in LA, and were already far more famous than Victoria or her soccer star husband David.

He said: "There is a feeling out here that the breasts have outgrown Victoria and that she is just holding them back.

"They are big now, but with a little help from the right people they could be massive.

"They walk into a room and everyone stops and stares. No one even notices Posh. The boobs are way ahead of her now."

Despite their hard appearance and rampant ambition, or perhaps because of it, the breasts have also sought to show the softer side to their character by setting up a support group to help other celebrity chests.

The left breast said: "We wanted to give some support to other celebrity boobs, especially those less fortunate than us whose careers have started to sag."

Meanwhile the right breast has immersed itself in the teaching of L. Ron Hubbard and has already achieved the 'rank' of  'Operating Branflake' within the church.

But despite joining the Scientologists both breasts admit that John Travolta is now an 'embarrassing mess'.