A BOSS has made the tea for the first time this millennium, his office has confirmed.

CEO Stephen Malley left his office wondering why his PA had not brought him his tea, was drawn into conversation and ended up offering to make tea to impress a woman from audit.

Underling Nikki Hollis, aged 35, said: “There was a stunned silence at first. I think we were all unconsciously groping for a way to stop him.

“I’ve worked here 13 years and it’s never happened. Marie’s been here forever and she can’t put an exact date on it, but she’s pretty sure it was before Radiohead went crap.

“Then we started to realise that we were giving him an extremely complex tea order and he doesn’t know where the mugs, the coffee, the tea, the sugar, the kettle or possibly the kitchen are, and we all swung into action to help.

“I asked for a green tea, which I made entirely myself while he congratulated himself for making a green tea for the first time.”

“Then we all had to loudly drink them and savour them while he stood there, hands on hips, like a toddler after a successful dump. It killed productivity for an hour.”

Malley said: “I’m not paying them to drink tea all day. Redundancies.”

How to be a knobhead about wearing earbuds 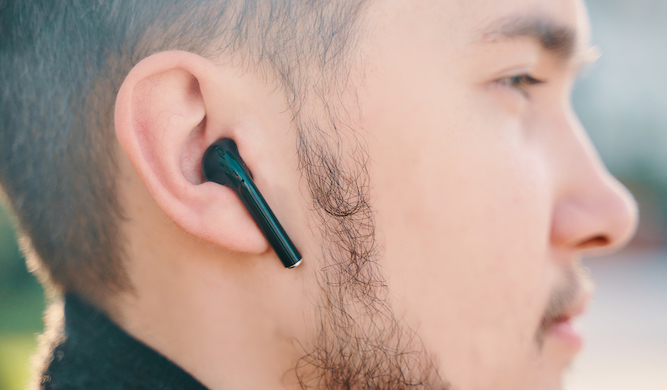 THINK wireless earbuds make you look cool? Only until one falls out into your skinny macchiato. Here’s how to be even more of a twat about them.

You don’t realise they aren’t connected

With a wire, you know when it’s in. Without and you’re blasting Drake at top volume to a crowded train, wondering why it’s so quiet. Now everyone on your train knows you listen to Drake, and your commute is a commute of shame.

Like vaping, earbuds are the future arriving and not looking anywhere near as cool as it did in the films. They make even the vaguely stylish into tools, and look extra-cretinous on large men in small vests at the gym.

You lose them constantly

Nestling in lint and old Rizlas in a coat pocket, perilously close to an undetected hole? Lost deep in the bottom of a handbag? Bounced out of an ear while alighting from a bus? That’s you on the hook for £70. Wouldn’t happen with a Walkman.

You have to charge them

Speaking of Walkmen, remember that horrible moment your tape slowed half a tone because the batteries were going? That doesn’t happen with earbuds. They just run out of power, so now you need to charge your headphones as well as your watch and your phone.

You insist on telling people about them

When people stare at your earbuds you presume it’s because you’re so cutting edge. They actually think you look a wanker, but don’t let that stop you from banging on about kilohertz and sound pressure until they start crying with boredom.