It’s that time of the year again folks! Before we go any further I have to say that Wimbledon has got to be my favourite place in the whole, wide world, even if it isn’t a tax haven.

I have so many happy memories of the place. Years ago a close pal of mine was Britain’s Number One women’s player and she showed me around the ladies’ locker room at the end of play. I was like a kid in a sweet shop! “Think of all the really, really great women players who’ve been in here over the years. Look! There’s Martina’s kit bag over there – and there’s a picture of Virginia Wade winning the Singles in 1977, 4-6, 6-3, 6-1!” I think my friend was feeling a bit stressed and tired because she’d wrapped herself in a towel, laid herself out on a bench and asked me to give her a back rub. Unfortunately I had one of my headaches.

But the Championship isn’t just about strawberries and cream or Andy Murray getting knocked out by one of three players who will always be better than him. It’s about history, it’s about tradition, and best of all it’s about the Cliff Richard Celebrity Pro-Am Classic, which takes place on the middle weekend of every Wimbledon and, even though it remains consistently untelevised, is without the doubt the high point of the international tennis calendar.

The first year of the Cliff Classic I remember being paired with my great friend, the wonderful character actor, Richard Griffiths. He had the crowd in fits of laughter when, following a close line call, he stood in front of the official and bellowed his famous catchphrase ‘linesman, you terrible c**t!’. So Richard, so Wimbledon.

Henri Leconte and Brian Dennehy eventually retained their title with a straight sets victory over Tracy Austin and Russell Grant.

The one thing I do miss these days is the old Centre Court – you know, the one minus that wretched roof. Okay, there are many who argue that it means play can go on and people don’t have to wait around for hours during rain breaks. But what the organisers haven’t taken into consideration is the fact that Cliff fans worldwide will never again experience the sheer joy of a fab, impromptu concert in the pouring rain.

All England Club? ‘All Fucking Bastards Club’, more like. 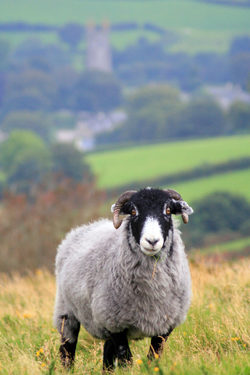 GENETICISTS have created a sheep that produces kebab meat, it emerged last night. Cutting-edge recombinant DNA technology has enabled the creation of Nancy, a six-month-old ewe whose flesh is of the same matter popularly known as ‘doner’.

“But when we humanely removed slivers of flesh from her back, cooked them intermittently on a spike for several weeks then ate them from a dough pocket with a bit of everything from the laboratory salad bar, the taste was unmistakeable doner.

“Kind of salty and fatty, with a hint of more salt and more fat.”

He added: “Animal-grown kebab has long been the holy grail of the food science community. In 10 years’ time even microwave burgers could contain animal meat.”

Tom Logan, from Peterborough, said: “As a kebabist I’m not really comfortable with the idea of eating something that comes from an animal.

“I like to know that what’s in my pitta bread comes from the obscure ‘fourth place’ that exists outside the tedious norms of the natural world.

“That said I would probably eat a used car if I were drunk enough and it was coated in medium chilli sauce.”