One Woman’s Week: Fighting The Fat

I really believe it’s a wonderful thing that I can look around our British streets and see so many different walks of life being not only tolerated, but encouraged. The whites walk alongside the blacks, the rich with the poor, and the gays with the normal.

At the weekend, I happened upon the latest special needs group to join our society after my sister dragged me out to her favourite new store, Curvalicious. Perhaps you guessed by the name that the group of which I speak are the obese. But should we really be indulging our enormous friends the way we are?

I suppose it’s no bad thing that the discovery of an outsize bra and pant store has given my stupid and lazy sister the kick up the arse she needed to get off the couch and remove her gigantic paw from her bumper packs of Wotsits. She hasn’t really left the house on her own since her divorce a few years ago, so I certainly feel a boulder lift from my shoulder now that I don’t have to do charity missions with her to my favourite designer boutiques (because, I’m sorry to say, she was becoming an embarrassment!).

I felt distinctly uncomfortable in Curvalicious as my sister wobbled around the rails. I swear that from the minute I entered the shop, I received threatening looks from every woman there. I can only attribute this to their jealousy of my catwalk model proportions, but I refrained from involving the police because I really pitied their desperate situations. There was only one couple present and it may surprise you to learn that the man wasn’t even fat. In fact, he was rather petite, which somehow just made it all the more wrong. Needless to say, she dragged him to the exit as soon as I walked in: it must have been so difficult for her to see her man desiring a woman as exemplary as myself. If I could change things, I would, but there’s only so much I can do to improve our world – I am just one woman.

So my sister wound up buying a size double H bra – and that wasn’t even the largest available. The sizes went up to a double J. In my opinion that is halfway up the alphabet and practically unfathomable. My sister’s doctor claims her monstrousness is down to depression, but this is bogus. I suffer from severe depression on a regular basis because of my stressful work with primary school children and their disgusting parents, yet I am not the size of a house.

I can fully condone that our society supports minority groups, but I feel I must lay down some boundaries. After all, it’s not the ritual demolition of KFC buckets and flagons of Tennants Super that make Muslims the way they are: it’s Al Qaeida. The obese don’t have that excuse and I just cannot see how it is in any way constructive to cause them to enjoy taking their clothes off. Can’t the bosses of Curvalicious see they are only increasing the likelihood of these people breeding, and thus exacerbating the problem? I won’t be able to walk down the street without being eyeballed by heifers and desired by their bizarre companions. It will be a LIVING HELL. Retailers need to think about this before they do any more damage. 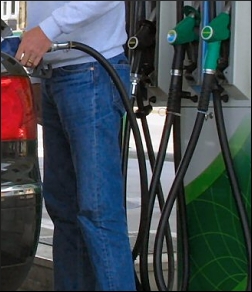 OIL company executives were last night heading to undisclosed locations amid speculation that consumers were about to make the link between high petrol prices and corporate profits. As Shell and BP both reported a sharp increase in first quarter earnings, industry experts said drivers who are currently sitting in a queue outside a petrol station in Scotland waiting to pay £1.25 a litre would soon work out the connection.

Tom Logan, an analyst at Donnelly-McPartlin, said: "At that point they will get out of their car, calmly dust themselves down and then commit every fibre of their being to hunting down oil company bosses and killing them like rabid dogs.

"They will develop a far away look in their eyes, wear camouflage clothing and sit around campfires at night, sharpening their machetes and describing all the ways they are going to inflict pain on the finance director of Texaco.

"There will also be those who want to hang them up by the feet until the last remaining pennies fall out of their pockets and then beat them to death like one of those Mexican donkey things full of sweets."

Some have even changed their names and signed up as Greenpeace volunteers in the hope of throwing angry drivers off the scent.

Logan added: "The executives may think they are safe inside their volcano fortresses, but I suspect they have not had to deal with a Scotsman who wants his money back."