One Woman's Week: Paedophile Priests Are People Too

It seems the media just can't help themselves when it comes to the Catholic Church. They'll pounce on the slightest slip-up and blow it out of all proportion. If we're not careful, this once magnificent institution, which has done so much for the people of Africa, will become nothing more than a pitiful community group like Alcoholics Anonymous or the Brownies.

Everyone has off days at work. But imagine you could never come home from work. That's what it's like for a priest. Plus, priests spend all day talking to God. Have you any idea how much of a big deal that is? It reminds of the day I had the incredible fortune to speak to Ed Balls at one of the many charity events I attend. I had to sit sobbing with my head in my hands for something like half an hour afterwards, such was the magnitude of the experience. So is it any wonder priests suffer a momentary lapse of focus?

Ask anyone and they will tell you that 2.5% of the general population has been involved in paedophilia at some point in their lives. If you look at the corresponding statistics for incidents in the priesthood, you will find that priests are less paedophilian and therefore more virtuous than the rest of us. So why can't we just leave them alone? And what kind of monsters are we when we supply padded bikinis and G strings to eight year-olds? All we're doing is goading these poor priests, especially the gay ones when it happens to be a little boy who's wearing the bikini.

It's just the latest in a long history of smear campaigns by the secular news industry. What we need is media monitoring and – dare I say it – censorship. It's worked extremely well in other countries so why can't Britain have the guts to silence atheist newspapers and the so-called BBC?

It is this – and only this – which will mend our so-called 'broken Britain'.

Yes, Sophie Dahl is pretty and has a nice house, but her chopping skills are practically non-existent and from what I can tell she even makes up words. Indeed, it wouldn't surprise me if the kitchen had been custom made for Ms Dahl and the tuneful hobbit who has taken her for a wife. Of course, there are numerous examples of nepotism at the BBC and Sophie is just the latest. Everyone knows she only got the job because of her grandfather, Roald, and he hasn't done anything of note for years. If you ask me, they should all be deported.

Perhaps it's just me, but with with her large neck and relatively small head, first lady Sarah Brown bears a striking resemblance to the illiterate Jamaican space-reptile, Jarjar Binks. With most young people still unmoved by the election campaign, surely it's time Labour capitalised on Mrs Brown's unique Star Wars glamour.

'Here Come The Girls' Leads To New Strain Of Harpie 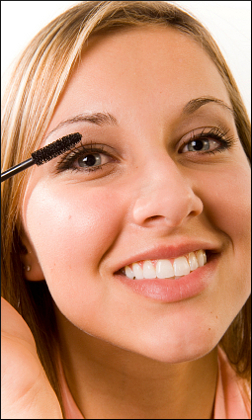 THE song from the Boots adverts has created an unstoppable strain of demented, screeching harpie, experts claimed last night.

Professor Henry Brubaker, of the Institute for Studies said: "The song contains resonant frequencies which stimulate the female hypothalamus, causing the neurotransmitters to become overloaded with dopamine. Or to put this another way, it makes them go fucking mental.

"They become violent and abusive and then cluster in small groups laughing riotously at some secret thing, although from the way they keep looking over it's obviously something to do with you."

He added: "The song effectively short-circuits the tiny, rational part of the female mind, and the results can be at once terrifying, cataclysmic and strangely beautiful.

"It's basically a call to arms and under no circumstances should it be combined with poor quality sparkling wine, which is a bit like feeding gremlins after midnight."

The song has been implicated in the death of a male stripper at a hen night in Hartlepool, who was torn apart with such ferocity that only a severed thumb and a bloodstained fireman's helmet were recovered.

Architect Nikki Hollis said: "I am a professional in charge of a large team responsible for delivering multi-million pound projects to the highest specifications, but when that song comes on I can't stop myself screaming like a randy fox, hitting a random stranger in the face with a shoe and then bursting into tears and pissing in a gutter."