It’s Halloween again and time to think about making a statement with your costume.

Us art school gals know it’s crucial to be a bit controversial. Many will be pushing the envelope this year with an edgy Jimmy Savile get up. If recent parliamentary Halloween balls are anything to go by, I know Hague will once again have this section cornered, recent events only exacerbating his rampant seasonal vim. Back in 03, he shook things up a little and came as Sporty Spice, but a couple of Pinot Grigios down and he magically produced his fat cigar and began bleating ‘Now then, now then’. It was just creepy and upset a lot of people.

The great news for many is that your neighbour’s teenage daughters will once again dress as naughty school girls. This year, instead of leering at them from a chink in your Venetian blinds, you can excitedly bound into the street wearing a sparkly tracksuit and John Lennon glasses and their dad will be delighted to snap you pawing them and cackling.

You might be tempted to partake in the Halloween tradition of becoming a sexy version of a thing. This strategy will be perfect if you happen to be one of those ‘butterface’ types who’d normally arouse suspicion by going out wearing a mask. Luckily, supplimentary contraceptive advice is freely available to you this time of year.

But to really keep them on their toes, you need to think outside the box. One year I went out as a pan fried sea trout with aubergine caviar and fennel. But get this: I deliberately put holes in my tights. See?

Always aim to throw them a curveball. Last year, we heard Clegg was going as Winston Churchill and Balls and Cooper as slutty nurses. I knew this was one area we could walk away with the prize, so I came up with the perfect plan for Dave, George and Boris: Crosbie, Stills and Suicide Bomber! We had all the right gear lying around: roll neck sweaters, aviator glasses, dozens of disposable mobiles and bottles of Tippex thinner. I wish you could’ve seen it, they looked totally random! But DC gets super paranoid  he said it wasnt fair on the hard-working police force who mightnt be able to distinguish him from the real suicide bombers  the heavy black beard might lead them to the snap decision that he wasn’t ‘a friend’. I must confess he had a point and eventually they went out as Torville and Dean and Oprah (Dave was Dean obvs).

I was livid when we didn’t win the weekend at Champneys, which was stolen from us by the National Advisory Group on Clinical Audit. They came as twenty five Barclaycards and a naughty nun – which I thought was in incredibly poor taste.

Why I am rejoining the Empire, by Darth Vader 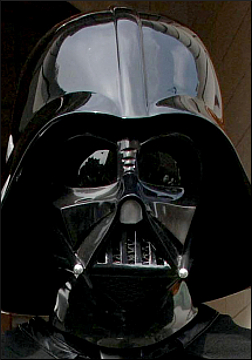 A FEW months ago I tendered my resignation to Emperor Palpatine.

At the time I had no regrets. As I said in my letter, the organisation was no longer interested in killing millions of people.

But today I am delighted to hear that the Empire is to merge with the Walt Disney Company. The opportunities for true evil are immense.

Therefore I have contacted Emperor Palpatine and Disney chairman Robert Iger and they have graciously welcomed me back as vice-president in charge of marketing and telekinetic murder. So let’s get to work.

Thanks to Disney’s unrivalled distribution channels and pan-galactic reach we will, together, be able to terrorise millions of planets.

The Death Star (never my title, I suggested ‘Fear Ball’) is only the tip of a massive genocidal iceberg.

Working with the team that created the Pirates of the Caribbean franchise, we will construct a fleet of colourful, inter-stellar brigantines which will embark on thrilling adventures and bring smiles to the faces of billions of children, moments before they are vaporised.

The geniuses at Pixar will help us create a never-ending series of irresistible films that will hypnotise generation after generation into believing that the Emperor is the source of all happiness and that friendship is very important.

We will also draw on Disney’s glorious tradition of feature-length animation with the release of The Princess and the Million Terrified Voices.

Meanwhile, we will use the Death Star as the model for a new ‘family’ of theme parks where the Emperor’s happy, obedient subjects can have fun crushing rebel scum in a detention level garbage-masher. Only this time there will be no escape.

They can then stand silently for the four o’clock ‘Parade of the Stormtroopers’ as row upon row of shining warriors, bristling with laser-death, march in perfect synchronisation, reminding our cherished Disney Death Star guests that they are but slaves to the Dark Side.

And we also look forward to teaming up with Disney’s ESPN network to change the face of modern sport. I am pleased to announce that from next season winning teams will be given the power of telekinesis which they can then use to strangle their vanquished opponents to death. Trust me, after a couple of weeks you’ll be asking ‘why wasn’t it always like this?’.

And so all that is left for me to say is: Go and see Wreck it Ralph, in theatres from November 2nd.