'Call that a party?'

by Boris Johnson, member for Uxbridge and South Ruislip and prime minister

AN idiot would look at ITV’s photos and leap to the conclusion that a large group of people drinking alcohol constitutes a party. That would be foolish and wrong:

It’s too tame to be a party

Features of any party worth its salt: chaps grabbing any passing filly’s arse, revellers passed out in pools of vomit, Gove zipping in and out of the loo and racist jokes aplenty. None of that here. I’m not even doing my elephant impression with my trouser pockets turned inside out.

What office doesn’t have a drink to celebrate a new spreadsheet? And doesn’t have a few dozen bottles of wine around, or glasses of champagne? Especially during lockdown? How anyone can look at those photos and see anything except a mundane slice of office life is beyond me.

There aren’t any presents

A leaving do has presents. There are none there. You might argue it’s just four snaps in one room so that proves f**k all. I disagree. Even when Matt Hancock got the boot there was enough of a whip-round for a Dairy Box and novelty socks.

It could be a meeting

I’m pretty sure I’m saying something like ‘Here’s to our brilliant Covid response’ and the blurry guys are responding ‘Yes, you showed superb leadership, Boris’ and ‘Let’s get back to working hard after this well-earned five-minute break to have a refreshing glass of non-alcoholic lemon squash.’

Carrie isn’t tearing a strip off me

The wife’s not great when she’s had a few. Normally she goes ballistic and starts calling me a ‘fat bag of egotistical shit’ and worse. She’s not in the photo with her arm outstretched and the contents of a glass of chablis about to hit my face, so it isn’t a party.

Because I say so

Frankly I’m sick of this shit. I’ve paid one fine and that should be the end of it but no, everyone keeps coming back with new accusations. The only people who matter are my voting base of grunting trogs who don’t care about anything except Brexit and immigrants. So piss off.

You don't care about this, public reminded 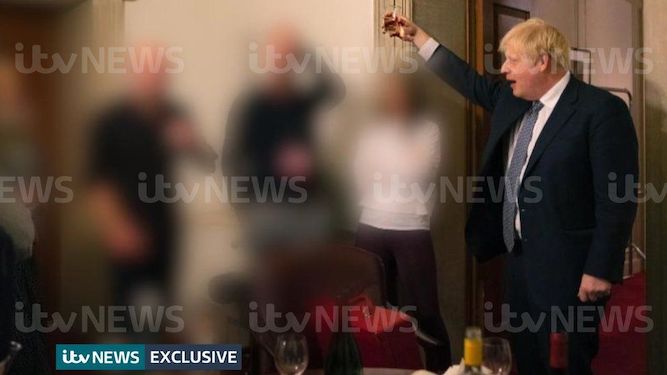 THE public have been reminded by the Conservatives that they are not the least interested in Partygate and want the government to get on with the job.

After new photos emerged of Boris Johnson at a party which he had explicitly denied was a party, official sources once again advised the electorate how bored they are with the whole thing and how much they want to move on.

“But, just for the avoidance of all doubt, please listen to these words and repeat them, you are sick to death of the media’s anti-democratic agenda, you could not care less about Partygate, and your parents dying alone doesn’t bother you in the slightest.

“In fact you broke all the rules yourselves far more flagrantly so you’re not in the least angry. This doesn’t change your voting intentions at all, especially not in the Red Wall.

“You’re not bothered about these photos. You probably haven’t even noticed them. And if you have, all they did was remind you of hypocrite Keir Starmer’s Beergate which you’ll never forgive him for.”

Steve Malley of Stoke-on-Trent said: “It’s true, I don’t care. I made up my mind that Johnson can go f**k himself long ago.”