MISERABLE people who want everyone to be unhappy like them have begged Theresa May to carry on with austerity.

While most Britons welcomed the proposed end of austerity, there was disappointment among those who enjoy wallowing in misery, preferably other people’s.

Retired park keeper Norman Steele said: “We didn’t vote for austerity for trivial economic reasons but because it’s just the way things should be – grim and depressing.

“My wife and I have always thought of austerity as a collective punishment for everything that’s wrong with modern society. By which I mean dole scroungers, overpaid public sector workers and reggae.

“People have it too easy these days, with their big TVs and fancy public libraries. When I was young the teachers would beat you unconscious with iron bars just for smiling. I definitely remember that happening.”

His wife Linda said: “We’re from the Second World War generation, which is people who watched a lot of war films in the 1960s and 70s. It was character-building, seeing what those actors went through.

“I just want the government to carry on with austerity but make it worse. They should get rid of buses and make everyone walk everywhere in shoes that are too tight. Or diver’s boots.”

The British person's guide to making a complaint 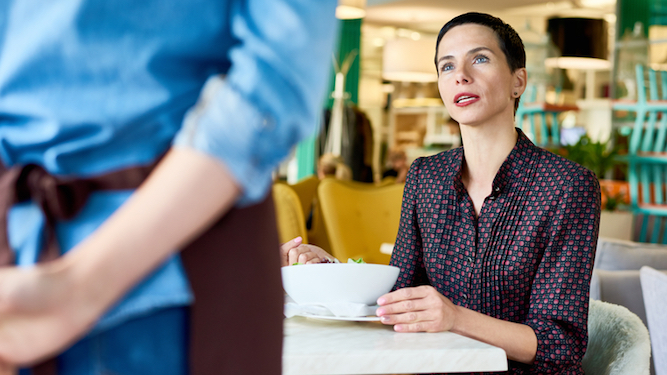 DO you sometimes need to make a complaint but hate direct conflict like most British people? Here’s how to do it in a pathetic, passive-aggressive way.

Moan at your partner instead

If the food at a restaurant is terrible, the likelihood of a British person making a complaint is slim. Instead, smile broadly at the waiter and claim everything was wonderful, then whinge about it to your partner on the way home and for the next seven months.

Write something horribly vindictive on TripAdvisor

Rather than tell staff at a B&B there was a hair in the soap dish, as a Briton you should wait until you’re home and write a rant on TripAdvisor calling it a ‘dangerous, germ-infested hell-hole’. If your OTT complaint gets them shut down, it’s simply taught them a valuable lesson about customer service.

Are your neighbours playing their music a bit loud? Don’t tell them it’s annoying and give them a chance to change their ways. Instead start a long, bitter dispute by calling the council and the police, for good measure. They love dealing with stuff like that.

Wage a petty guerrilla war with your workplace

Do you end up doing quite a bit of unpaid overtime? Rather than speaking to your boss about it directly, ‘accidentally’ drop their favourite mug so it breaks. Ha. That showed them. Unless they just buy a new one.

Put the people next door under surveillance

In any dispute with the people next door, immediately gets loads of cheap CCTV cameras to ‘collect evidence’. They may be thoughtlessly blocking your drive occasionally, but you’re the winner because you’ve made them live in Nineteen Eighty-Four.