Brexit campaign baffled by its appeal to people with tinfoil hats

BREXIT campaigners are puzzled as to why the movement is attracting so many lunatic conspiracy theorists.

As David Icke gave his backing to the campaign, Eurosceptic organisations confirmed that many of their supporters looked odd and carried ‘documents’ around in a plastic shopping bag.

Tom Booker, a coordinator for the Brexit movement, said: “All we want is for Britain to leave Europe and negotiate its own trade agreements. And for Brussels to stop controlling our minds with special Euro-rays.

“Yet for some reason, this seems to attract all kinds of weirdos.”

He added: “Why can’t we get someone sensible like David Attenborough or JK Rowling on our side? Surely they both realise deep down that Britain should take immediate control of India again.

“Instead, we get these horrid, off-putting Little Englanders who think that Brussels is tampering with our water supply. It’s nonsense, Brussels is using a special hypno-gas.” 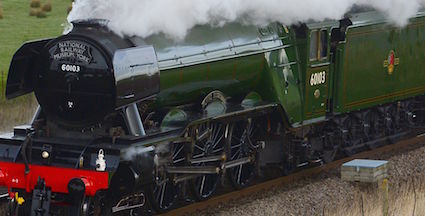 THE return of the Flying Scotsman has reminded Britain of a simpler time before the internet ruined everything.

As the majestic steam engine took to the rails once more, the country remembered that it used to create proper things, instead of just a stream of worthless, ill-informed opinions.

Professor Henry Brubaker, from the Institute for Studies, said: “Back then proper people would get on proper trains, read a proper newspaper and mind their own business.

“If they had an opinion they might write a letter to a newspaper using actual sentences and sign it with their real name.

“They spent quality time with their friends and family with whom they would share their experiences, rather than printing a load of leaflets about themselves and handing them out to strangers on the high street.”

He added: “Sadly, the return of the Flying Scotsman still failed to create as much excitement this week as Facebook introducing some little symbols to help you express your ‘feelings’ about some piece of shit on the internet.”