GORDON Brown is today hosting a high-level summit to discuss radical new measures aimed at helping him keep his job.

Labour sources say the initiative will not only stave off unemployment for the prime minister but help him realise his lifelong ambition of ensuring that everyone in Britain, in one way or another, is working for the government.

The measures include giving £2500 to companies for every new person they employ to sit around all day doing nothing because no-one is buying anything anyway.

He added: "The problem is that once a person loses a job they can easily be trapped in a long term spiral of thinking it's all our fault.

"Unless we invest this money now we risk losing the gratitude that will make the Labour Party stronger and more competitive."

A spokesman for the Confederation of British Industry said: "The £2500 is very welcome, although we are a bit puzzled as to where the remaining £18,000 is going to come from.

"Hopefully we can use the money to train these new workers and then sell them to the highest bidder in the street markets of Abu Dhabi." 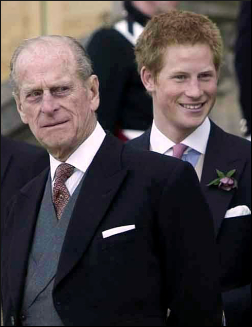 PRINCE PHILIP has changed his will in order to bequeath his extensive collection of racist paraphernalia to his favourite grandson.

The move comes after Prince Harry was caught on camera using racially offensive language to the shock and surprise of absolutely no-one.

According to Palace insiders Philip considered changing his will four years ago after Harry asked to borrow his dress Swastika, but decided to wait and see if the young prince developed the maturity to wield fully-formed racial slurs.

Now Harry is set to inherit Philip's prized copy of From Abo to Zorba: The Illustrated Dictionary of Racial Epithets, as well as his silver-plated Jew-detector and his Coolie stick.

Constitutional expert Denys Finch-Hatton said: "Philip loves nothing more than rummaging around in jumble sales looking for racist knick-knacks from the 1920s.

"Indeed, one of his most common complaints in recent years is how no-one makes a decent pair of wog-shackles any more."

Finch-Hatton added: "Of course he's delighted at the way Harry has turned out. Since the Queen Mother died there are very few people he can talk to about darkies and chinks.

"In fact I'm sure if he could, Philip would even change the order of the succession, missing out both Charles and William, who he regards as little better than gay communists."

Meanwhile Harry is to be disciplined by his regiment and given special training in how to be racist without recording the whole thing on video.