SURPRISED by the problems of leaving the EU? You probably chose to ignore the issues foreseen by people you hilariously called ‘Remoaners’:

Supply chains will be disrupted

People who voted leave assumed that goods would continue to merrily trundle across the channel from a power bloc that still loves us really. But with Nando’s pulling down its shutters, Brexiters are forced to consider that maybe things aren’t going swimmingly. If only Remoaners had warned us. The shortage of Peri-Peri chicken is all their fault.

There’ll be a skills shortage

This idea was scoffed at during the referendum by Eurosceptics. By taking control of our borders we could recruit the best and the brightest, what could go wrong? It’s not like highly-skilled foreign workers will be repulsed by a country that has done the diplomatic equivalent of giving them the middle finger. Oh.

Ireland will be a total mess

Remoaners have spent the last few years screeching about how Brexit will rip up the Good Friday Agreement and make exporting to Ireland all but impossible. Thankfully the backstop magically fixed all that. Or was it the Northern Ireland Protocol? Who knows. It’s too complicated to make sense of so let’s continue to ignore it.

Firms will piss off to the continent

More than 400 financial firms have scarpered to the EU as a result of Brexit, a shocking development that nearly half the population knew was bound to happen. However the sky hasn’t literally fallen in which they definitely, 100 per cent said would also happen, so what do those metropolitan elite types know?

The NHS will get f**k all

Turns out that misleading statements written on buses aren’t legally binding, and the NHS isn’t going to get showered with the riches it was sort of promised by Dominic Cummings to win votes. Anyone who pointed this out at the time though was a traitor and a saboteur, so it’s a good thing you didn’t listen to them. 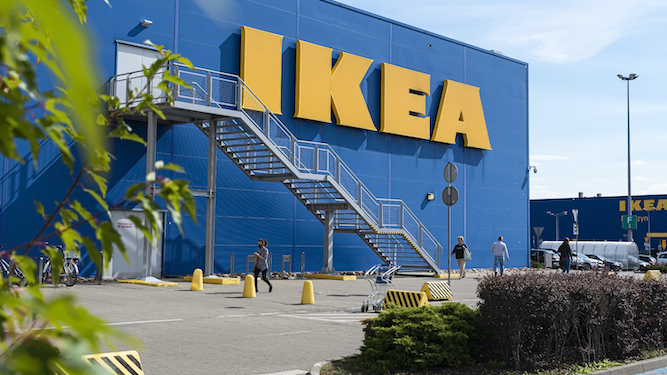 GOING to IKEA? You’ll end up leaving with nothing that you came for and a heap of junk you don’t need. Here are five big offenders:

This disaster of a rug looked so cool in the Scandinavian show-bedroom and you got carried away imagining a different life where you ski every weekend and are a natural blonde. When you get it home it just looks like you’ve carelessly thrown a dead dog on the living room floor.

The idea of having a huge, exotic plant in your living room is better than the reality, which is that you live in a tiny studio flat and won’t be able to see past it to the television. Luckily, because you got it from IKEA, it will die within three weeks, allowing you to repeat the process next time you shop there.

For a moment there you briefly imagined yourself as the kind of person who brings lunch to work in tiny, reusable see-through boxes, not someone who eats a Pret sandwich at 11am and another at 2pm. These boxes will serve no purpose other than annoyingly falling out of the kitchen cupboard every time you open it.

You wouldn’t in a million years consider buying a Daim bar from any other shop, because they’re both sickly sweet and hard enough to snap your teeth on. However, you pick up several bags near the checkout every time you go to IKEA, for no reason that you could ever explain.

You saw this on offer in the kitchen section and just had to buy it. But when you get home the panic hits. What even is it? You can’t remember, and the instructions only say that it needs AA batteries and not to put it in direct sunlight. Good luck.