Hain Unaware He Had Been Given A Bentley

PETER Hain, the work and pensions secretary, last night insisted he was too busy to notice that he had been given a £100,000 luxury supercar.

Mr Hain admitted the car had probably arrived during his failed bid for the Labour deputy leadership, adding that it handled magnificently.

He said: "I was so focused on my role as Northern Ireland secretary at the time that I would simply get out of bed and head off to work without noticing that I was behind the wheel of a brand new Bentley Continental GT. I thought it was just some kind of fancy bicycle.

"Still, I have to say, this is a serious motor. It goes like shit off a shovel and can remember my three favourite driving positions.

"And oooooh, the leather. I could just sit there rubbing it all day."

According to Mr Hain's campaign records the car was donated by a little known left-wing think tank, the Progressive Policy Forum. The organisation was set up to conduct research into key areas of public policy and to give cars and money to senior Labour politicians.

In addition to Mr Hain's Bentley, the think tank donated a Mercedes S-Class to Hilary Benn and a top-of-the-range Volvo XC90 to communities secretary Hazel Blears.

Mrs Blears registered her car with the electoral commission along with the handwritten comment, 'You fuckin' beauty!'. 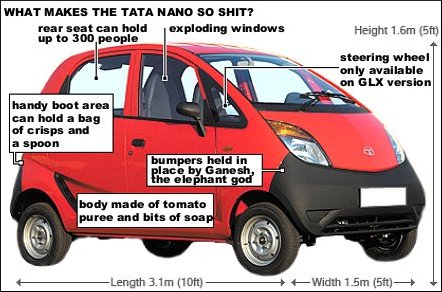 TATA, the Indian car giant, yesterday unveiled what it claims is the world's shittest mode of transport.

The company said the 'Nano' – Hindi for 'death turd' – is designed to be both affordable and a complete piece of shit.

The car, to be built initially for the Indian market, will cost around £1200 – roughly 1200 times the average weekly wage and three times the price of a house.

The manufacturers have warned that in certain parts of the country it will be advisable to maintain the top speed of 43mph in a desperate attempt to avoid being chased down by hungry leopards.

The car has no air bags and no air conditioning, despite average Indian summertime temperatures of 150 degrees Fahrenheit.

The company has also cut costs and increased the danger by removing the hand brake and filling the glove compartment with killer wasps.

Tata expects to sell more than 400 million Nanos, despite the fact that most Indians have absolutely nowhere to go.

Motor industry analyst Tom Logan said: "The Nano is likely to be the first in a range of incredibly dangerous pieces of shit and is confirmation that Indians remain the world's most expendable people."