If The Answer Is Vince Cable Then I'm Moving To France, Says Everyone

IF the answer to Britain's economic problems is Vince Cable then what are the schools like in the Dordogne, it was claimed last night.

As the Liberal Democrat treasury spokesman once again made it perfectly clear that he thinks he is much, much better than you, people across the country were surprised at how much house you can get for your money south of the Loire.

Mr Cable lined up alongside rivals George Osborne and Alistair Darling in a Channel Four debate on Britain's economic future while millions of viewers stressed that French social security contributions are comparatively high but you do get what you pay for.

Julian Cook, from Finsbury Park, said: "Give him his credit, he did correctly predict that Ricky Martin is a gay man, but apart from that all he seems to do is tell people what's in the Financial Times."

He added: "Four bedrooms, an acre of land and a pool for £250,000. And it's near a village with a twice weekly open air market and a bistro. Yeah… sure… Vince Campbell would be a terrific thingumy of the whatever…"

Joanna Kramer, from Grantham, said: "Bearing in mind that politicians are the unfunniest bastards in the history of the universe then I suppose Vince Cable is relatively amusing when compared to, say Anne Widdecombe or Adolf Hitler. Unfortunately I don't think there is a huge export market for pithy metaphors and self-satisfied put-downs."

She added: "Did you know that the TGV travels at an average speed of 174mph and has a 98% punctuality rate? But I'm sure Vic Claypole will be super at whatever it is you would like him to do."

Meanwhile, in the aftermath of the debate the Tories said that expectations on George Osborne were so low that he had won simply by not boasting about how rich he is, using the word 'piccaninny' or urinating in his underpants.

It is not known how chancellor Alistair Darling performed as everyone had made sure they had something else to do while he was speaking.

I Have Feet, Says Ricky Martin 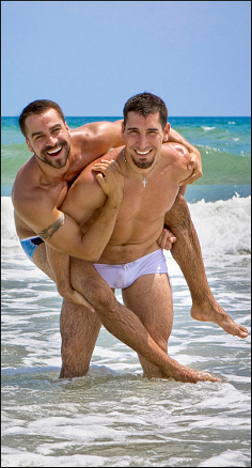 POP star Ricky Martin has ended years of speculation by confirming that he has a foot at the end of each of his legs.

Sitting on a dayglo pink chair in the shape of a foot, he said: "I am blessed with feet. I am a proud, two-footed man.

"I want the world to know that my feet are a gift that give me life. And also help me to stand up, walk my chihuahua and operate machinery with my toes."

The Puerto Rican star said he had tried to conceal his befootedness for years after his advisers told him it could hurt his career.

He added: "I always wondered about that given that 99% of my fans are two-footed men who spend a lot of time and money trying to look exactly like me."

The singer found fame with the boy band Menudo but launched his solo career with the 1999 hit Good God, I'm So Obviously Gay.

Martin fan Tom Logan said: "When I saw him dancing around on stage I strongly suspected he had at least one foot and possibly as many as two.

"It did occur to me that he had two children, but then again Oscar Wilde also had children and feet."

Meanwhile showbiz pundits say Martin's announcement could pave the way for Hollywood superstar Tom Cruise to confirm that he has brown hair.