Mcconnell Barricades Himself Inside Bute House

FIRST Minister Jack McConnell has barricaded himself inside his official residence and is refusing to leave.

McConnell has piled furniture against the door of Bute House in the centre of Edinburgh and seems unwilling to relinquish his office, despite Labour's election defeat.

According to a Scottish Executive spokesman the First Minister arrived at Bute House early this morning and ordered the housekeeping staff to leave.

He bolted the doors, locked the windows and dragged the Cabinet table into the hallway to act as an additional barricade.

He could then be heard laughing and singing as he made his way to the second floor.

Half an hour later McConnell unfurled what appeared to be a hastily prepared home-made banner which read: "This is my house so sod off." He completed the protest message with "JM rules" and a smiley face.

A senior Labour source said: "After the election he spent the first 48 hours screaming, pretty much non-stop.

"Then he became euphoric and demanded that we all go to Bellahouston Park for a naked picnic. Jack usually prefers to have his naked picnics at the Burrell Collection, so naturally we became concerned.

"The next thing we know he tells everyone that he 'has a plan' and then he jumps into his car and heads for Edinburgh."

The police have decided on a 'softly softly' approach and will try to negotiate with McConnell rather than smashing the door in and filling the place with tear gas.

Edinburgh University psychologist Dr Wayne Hayes, said: "He seems to have freaked out." 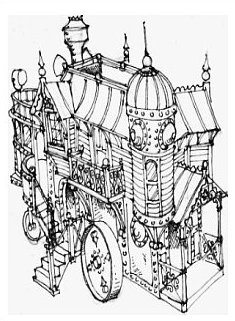 Sirs,
It is with the utmost urgency that I write to you, my fellows of the Royal Society of Scotland, to alert you to the danger posed by Mr A Salmond and his proposal to build a steam driven contraption with the intention of burrowing to the centre of the Earth.

This Mr Salmond is a coarse fellow of questionable qualifications. He achieved his undergraduate degree at the University of St Andrews which is hardly an institution frequented by gentlemen of good standing. His research associates are an ill-disciplined band of amateurs who would be as out of place in a laboratory as they would within the walls of a reputable club or salon.

But it is not the quality and integrity of Mr Salmond and his compatriots that concerns me the most. No, my esteemed fellows, it is the very detail of this ill-considered scheme to send human beings, under the power of steam, to the very centre of the Earth.

Has Mr Salmond acquainted himself with the geological and thermal conditions which would pertain upon the commencement of such an expedition? I would venture, sirs, that he has not.

Has he, in his mathematical formulations, allowed for the discombobulating effects of excessive pressure on the human physiology? I would speculate that such thoughts are a stranger to his considerations. While this may appear obvious to gentlemen of academic standing, one final question remains pertinent: Where does Mr Salmond intend to put all the steam?

Sirs, I have inspected Mr Salmond’s contraption. From its nuts and bolts and its widgets and gadgets, to its very valves and rivets. I have never seen an assembly of parts so contrary to the accepted regulations of modern engineering. It will be to my eternal astonishment if this irresponsible collection of flaps and hinges gets beyond the workshop never mind to very the centre of the Earth.

Therefore I urge you, the most qualified and respected subjects of Her Majesty’s Realm of Scotland, to condemn this Mr Salmond and to instruct your research assistants, your servants and their dependents to offer no encouragement to this unmitigated folly.