MEMBERS of parliament are to award themselves a monthly allowance based on how guilty they feel about under-equipped British soldiers in Afghanistan.

The size of the payments will be linked directly to the number of casualties, with MPs warning that the guiltier they feel, the more money they are going to need.

A spokesman for the Speaker said: "This is about regulating what has been an informal system. In the past, an MP would feel a bit guilty without a receipt and then ask for some free money to cheer himself up.

"But in the wake of public anger over members' expenses it is vital the new system is made transparent and accountable by establishing a formal link between the hellishness of the Afghan war and the comfort of MPs.

"And of course it goes both ways, so if things start to improve in Afghanistan then MPs will get less money because there will be no guilt that needs to blanked out with loads of new stuff."

Labour backbencher, Tom Logan, said: "I used to scoff when my wife talked about 'retail therapy' and how she could make herself feel better by using someone else's money to buy things she didn't need.

"But then I tried it for myself and, I have to admit, it worked like a charm. I don't know what I would have done if I hadn't bought this massive television set after reading a report about the lack of armoured Land Rovers in Helmand."

Sir Denys Finch-Hatton, the Tory backbencher whose house looks like Disneyland, said: "I went to Afghanistan last year and met some of our brave troops. It was a sobering experience and I vowed there and then to put in a claim for a series of concentric moats linked by small wooden bridges that were each guarded by a uniformed duck."

Prime minister Gordon Brown said he 'completely understands the motivation' for the guilt-based expenses system, adding: "Throughout the period I have been chancellor and then prime minister, I have been determined to make sure that the MPs serving our country are properly paid, that we make proper allowance for them, that we give them the best equipment and help them in every way possible."

Fatties Urged To Buy Mirrors Instead Of Pies 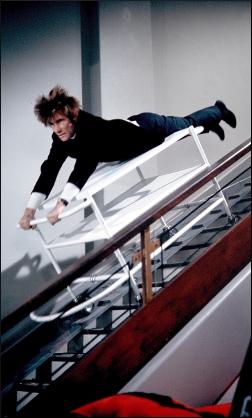 MOST fat people are unaware they are overweight because they spend all their money on cheesy pies instead of a mirror, according to a new survey.

Just seven per cent of respondents classified themselves as obese, with the majority preferring terms such as 'economy size' or 'magnificently wide'.

An NHS spokesman said: "Obesity is the biggest threat the country faces, until we decide it's something else like boiled eggs or chocolate milk.

"Most obese patients just think they're carrying a little 'winter fat' but of course in their case it's a winter that has lasted for years and years. Perhaps they all think they're from Narnia."

The survey follows a six per cent rise in slapstick hospital deaths after junior doctors committed a series of fatal errors whilst leering at nurses' boobs.

A new study has shown the jump in the mortality rate coincides with the annual intake of newly qualified doctors all attempting to fornicate with Barbara Windsor and Fenella Fielding.

A spokesman for the Royal London Hospital Trust said: "We lost eight patients after a first year house officer crashed through an intensive care ward on a trolley.

"The relatives would have sued, but luckily one of the nurses had the foresight to play her trombone as it was happening, thus making the entire episode absolutely hilarious."

He added: "You have to remember these are drunk, sleep-deprived trainees with massive debts, emotional problems and white coats covered in drug addicts' blood. We're lucky the building is still here."