A GREY, single-breasted Marks and Spencer suit with four-button cuffs and flat-fronted trousers is almost as popular as Sir Winston Churchill, it emerged last night.

According to a Sunday Times poll, 72% want the suit to be in charge in the event of another war against Hitler.

And a further 83% said that only the suit could really think about starting to begin to hopefully tackle the obstacles that are in the way of possibly making some sort of eventual difference to an as yet undefined quantity of stuff.

The public reaction to the matching jacket and trousers has now thrown everything in Britain wide open with experts stressing that nothing may ever be the same again, especially for those who have become accustomed to having a job and some money.

Joanna Kramer, from Finsbury Park, said: "The thing I really like about it is the way it came across as being pure new wool with an understated lining made from a mixture of polyester and viscose.

"And the little bag of spare buttons made me feel that I was finally being treated like a grown-up."

Bill McKay, from Hatfield, added: "I really liked the way someone had put a shirt and tie on the same hangar as the suit and then tied the tie so you could see how it would actually look with that particular shirt and tie. It was really fresh and exciting."

But Martin Bishop, professor of political buttons at Reading University, said: "Don't get me wrong, it's a perfectly nice suit and I'm sure that if it had been around during the second world war then someone may have looked reasonably smart in it.

"But I don't think it would have been much use in rallying the nation against the forces of fascism, mainly because it's just a suit."

Meanwhile during an interview on BBC1's Andrew Marr Reads the Papers, prime minister Gordon Brown refused to rule out working with the suit and insisted that a new electoral system was now the only way to stop politicians from stealing your money.

Neville And Scholes To Spend Summer Camping In The Mountains 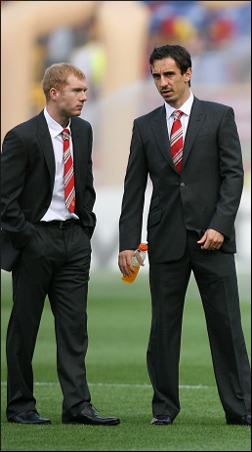 MANCHESTER United veterans Gary Neville and Paul Scholes are to spend the summer in a tent.

The team mates have decided to pack their rucksacks, head for a quiet spot on the slopes of Scafell Pike and just see where fate will lead them.

Friends say the England stars are likely to spend their days birdwatching and eating picnics and their nights going at it like a pair of monumentally homosexual rabbits.

The decision was made after their relationship moved to the next level in the dying seconds of the Manchester derby on Saturday.

Following Scholes injury time winner against Man City the midfielder pulled up his shirt to reveal a tattoo depicting himself and Neville as a pair of erotically entwined angels, with the slogan 'up where we belong'.

Neville then licked Scholes on the lips before gathering him in his arms and carrying him off the pitch to the rapturous applause of their ecstatic teammates.

Striker Wayne Rooney said: "Just beautiful and about time too."

But insiders insisted there have been rumours of inter-squad lovemaking at Old Trafford for years.

One sources aid: "Last year the plumber walked into the shower room to encounter a blur of ginger testes, bumfluff moustache and guttural Northern moaning. His hair went white and the very next day he left his wife and kids and went to live on the moors."

Julian Cook, professor of football at Reading University, said: "I'm not sure how this affects the title run-in but what we can say is that from now on when people think of Man United and a quivering, purple arsehole, it won't necessarily be Sir Alex Ferguson."