Nobody ever said anything mean about Ed Miliband, says Chuka Umunna

CHUKA Umunna has pulled out of Labour’s leadership contest in horror at the press’s unprecedented willingness to be unpleasant about him.

The MP was shocked to find journalists seeking to discredit him in a way that no other Labour politician has ever had to face.

“And you never read anything about Cherie Blair having a style adviser who was going out with a convicted conman when Tony was in power, or Neil Kinnock having the hair of a circus clown.

“Frankly I’m beginning to suspect certain elements of the British press may have it in for the Labour party, no matter who’s in charge.”

Human Rights Act to be replaced with Warhammer rulebook 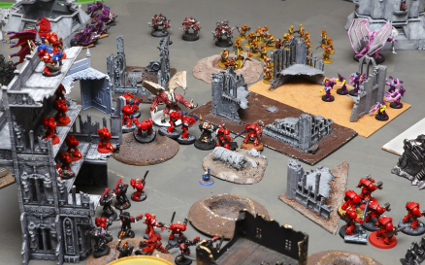 THE Government is replacing the Human Rights Act with Warhammer 40,000: The Rules.

The 208-page science fiction wargame rulebook is seen as the ideal replacement because it allows every possible type of conflict to be resolved with only a handful of dice.

A government spokesman said: “The legal system is convoluted and impossible for the layman to understand. Using Warhammer 40,000 we can reproduce that perfectly, but on a much smaller scale using beautifully painted miniatures.

“If you are claiming a right to privacy, for example, we roll two twenty-sided dice to determine your score, take away any debuffs – low income, being foreign – and measure it against the government’s own total.

“We make our rolls behind the books so you can’t see, but it’s all perfectly fair.”

The first case, a challenge of the government’s right to detain terror suspects without trial, has already been heard on Kulth the War World and ended in the defeat of the Imperium of Man by Tyranid Biomorphs without the right to appeal.

The spokesman added: “We have been asked why we chose to use the science-fictional Warhammer 40,000 rules rather than the original Warhammer Fantasy setting.

“Simply, we are not barbarians.”