AN upcoming general election will let the UK vote for parties they despise less than they despise other parties for the fourth time this decade.

A straw poll of the electorate revealed nobody deserved to be in charge but that some w**k-handed useless fuckers would have to be anyway.

Labour voter Martin Bishop said: “I’ll vote Corbyn, even though he’s like a sh*t design and technology teacher who never comes out of his room, because he’s better than Johnson.

“Meanwhile my wife can’t bear either so is basically ticking the ‘Don’t Know’ box, which is to say Jo Swinson and the Lib Dems.”

Tory voter Donna Sheridan said: “My MP’s been deselected so it’s a new mental Tory, a fresh-faced young communist or the old twat I already hated running as an independent.”

Green Party voter Nikki Hollis added: “I’ll be voting Green, because at this point why the f**k not?”

And Stephen Malley said, “I’ll be proudly marching to the polling station to cast my vote for Nigel Farage and the Brexit party, hand on red-white-and-blue heart.

“We’re the only people who sincerely want our party in power, and we’re categorically insane.”

Johnson to regain majority by challenging Commons to British Bulldog 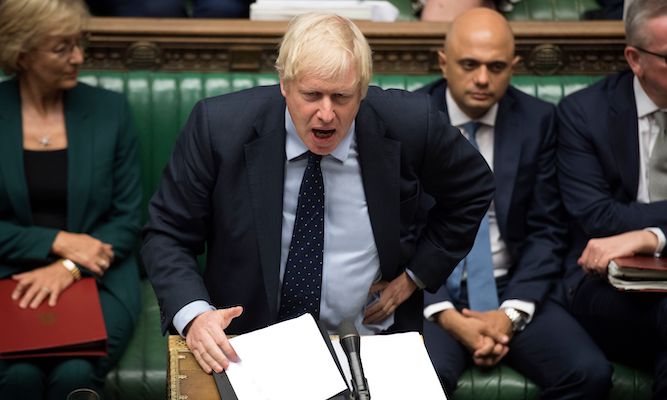 BORIS Johnson is to restore his majority by challenging the Commons to British Bulldog then stopping the game when everyone has crossed the floor.

The prime minister will interrupt today’s debate by suggesting a quick game of the playground favourite ‘to blow off steam’, calling anyone who objects unpatriotic.

Johnson then intends to position himself in the centre of the Commons, doing a deliberately poor job of stopping MPs as they charge toward him, and will then declare everyone on his side to be Tories giving him a majority of more than 600.

“Once you cross the floor you’ve joined a new party, yeah? So if we trick them all into crossing to the Conservative benches then they’re all Tories and we can pass whatever we like. Brilliant.”

The move is expected to end in tragedy when Boris Johnson’s lifeless body, trampled almost flat by hundreds of gleefully stamping feet, is scraped off the Commons floor.