SNP leader Nicola Sturgeon has set out her plans for the entire universe.

Sturgeon pledged to bring ‘core Scottish values’ to undiscovered planets, millions of light years away, as she unveiled the SNP manifesto, This is Who the Fuck We Think We Are.

She said: “We remain focused on achieving independence for the Solar System, but we believe a Scottish-led Solar System can be a force for good throughout the cosmos.

“Let’s imagine a planet that I call ‘Zartax 5’. For too long the working class, blue-skinned creatures of Zartax 5 have been exploited by the lazy, green-skinned bankers of Zartax 4, sipping Ultra-Champagne in their shiny, spherical mansions.

“It’s time to disable the warp drive on the Zartax 4 gravy spaceship.”

The Scottish first minister pledged to create a vast, intergalactic government that would share the natural resources of the bright orange moons, rich in a substance she will name ‘murrellium’.

Sturgeon also dismissed comparisons to Kathryn Janeway, from Star Trek: Voyager, adding: “In Voyager, Janeway was just a captain and, as you can see, I am wearing my Star Trek admiral’s uniform.”

The McConaissance gives way to the McAge of Enlightenment 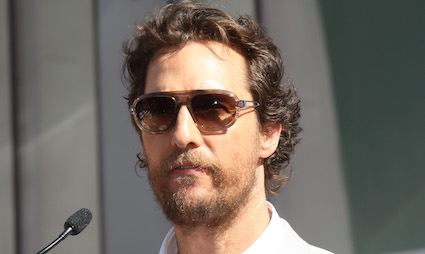 THE reinvention of Matthew McConaughey’s acting career has entered a period of philosophic upheaval and rational, scientific debate.

Julian Cook, head of Matthew McConaughey at Roehampton University, said: “The McConaissance has been a time of great cultural and spiritual advance. We have seen the dark, primitive days of Failure to Launch and The Wedding Planner replaced by a far more watchable era in which Matthew mainly smokes fags and shoots people.

“However, after five years of filmography reformation and artistic progress, Matthew’s career is showing signs of a shift towards reason, empiricism and scientific rigour.”

Cook added: “Instead of looking moody and trying to win Oscars, Matthew is now beginning to question the fundamental nature of truth and the centrality of human freedom.”

McConaughey’s agent, Donna Sheridan, said: “This whole McAge of Enlightenment thing has been a massive ball-ache so far. I have been trying to get Matthew to sign on for Magic Mike 3, but he seems more interested in evoking a Cartesian shift between external authority and internal certainty.

“I’ll be glad when this period is finally dislodged by McRomanticism in a few years’ time. That way, I can get him back doing shit-but-lucrative rom-coms.”