Thatcher Wanders Into No.10 Broom Cupboard

Observers said Britain's longest serving post-war premier may have been looking for her favourite lavatory when she took a wrong turn at the top of the main staircase.

Once inside the cupboard she could be heard conducting a long discussion with an upright Dyson, perhaps mistaking it for Lord Tebbit, the former trade and industry secretary.

One Downing Street insider said: "She came back down the stairs, walked past Gordon as if he wasn't there, headed straight for the PM's office and closed the door.

"We all just shuffled about in the corridor not really knowing what to do."

After 10 minutes at her old desk Baroness Thatcher reappeared and ordered the cabinet secretary to assemble the heads of the armed services so she could be briefed on the latest plans for the invasion of Buenos Aires.

The source added: "She then looked straight at Gordon and said, 'remind me to sack Francis Pym', before slamming the door again."

A government spokesman said: "Later today a police marksman will attempt to take down the former Prime Minister with a tranquiliser dart.

"If successful we can then wheel her out via the whip's office and into the back of a Transit."

Mr Brown and his advisers are expected to work in the basement canteen until Baroness Thatcher has been strapped to a trolley. 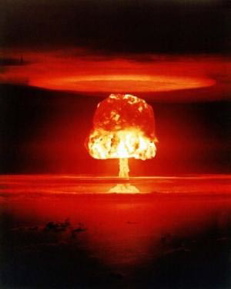 TUMBLING house prices and the bail out of the Northern Rock will lead to the resurrection of the dead, Armageddon and the beginning of the End Times, leading Christians confirmed today.

Bill Mckay, of the Pentecostal Church of Dundee, said the current turmoil in the financial system would inevitably lead to a darkness covering the earth and war pouring out on all the nations.

However, he said the coming back to life of everyone who had ever lived would provide a short term boost in demand for rented property, especially one and two bedroom apartments in city centre locations, before the world was consumed in fire and Rapture ensued.

Mr McKay said: "In the age before the last days there will be terrible times when people will love to talk only of the value of their houses while at their dinner parties and not of the Lord and his ways or even the terrible litter in the neighbourhood and the noise from the all night kebab shop.

"Before the last days the scoffers will come and they will say the banks are perfectly solvent and that property prices round here never go down because it is a really sought after area with good schools but yea, the scriptures say, they will find themselves deep in the shit when the balloon goes up and they can’t afford their repayments. Smug tossers.

"On the final day the Lord will call in his loans and all will have to stand before him with their mortgage statements and those that are more than three months in arrears or £1,000 in debt on the credit cards will be cast into hell, along with all the directors of the Northern Rock and every estate agent in the land."

Alasdair Darling, Chancellor of the Exchequer, said: "Could you hang on for just a minute, I think I may have shat myself."