THE public has confirmed it is content to watch an impaled Boris Johnson wriggle like a worm on a hook for a while before being finished off.

Sue Traherne of Ludlow said: “Fatally wounded? Gutshot? Dragging himself, bleeding, into a hiding place to escape the hunters? My summer just got made.

“It’ll be very different from summer two years ago, under lockdown, not seeing anyone, not having drinks parties in the f**king garden, but my enjoyment is closely related. The one justifies the other.

“I hope he thrashes and screams and does as much damage to the party as possible in his final throes. And you know what? I really think he will.”

Ryan Whittaker agreed: “The great thing about a duplicitous narcissist getting cornered is that he’ll do anything necessary, no matter how hilariously kamikaze, to survive. Even though you know he won’t!

“There’s time enough to schedule the arse-kicking of Boris Johnson out of Downing Street as the BBC’s big Christmas Day evening show. Imagine the ratings.” 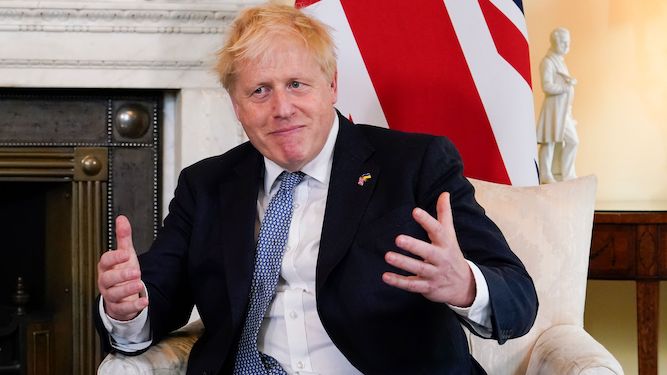 MY MPs tried to kick me out. The country booed me at the Jubilee. But I’m here with one thing to say to the turncoats: suck my big posh dick.

First up – my so-called party. Especially you Red Wall scum. If it wasn’t for me you’d still be accountants in Shitville-on-Sea, so down on your knees and get sucking. I’ll regard it as a bit of rough.

No one wants to be sucked off by Andrew Bridgen, but them’s the rules. And of course there’s Jeremy Hunt. Get down there and do a good job on my balls. No kneeling on a cushion.

Nor have I forgotten the journalists saying it would be ‘a close-run thing’. Big f**king deal, I won. Chris Mason and Fiona Bruce, let’s see your heads bobbing away. Not Peston, he’d enjoy it too much.

Then there’s those booing crowds at St Paul’s. Ultimately you humiliated yourselves so get your gobs round my knob. Most of you voted for me anyway. On with it and don’t worry about putting your false teeth in.

Obviously I’ll be pretty spaffed out by this stage. I’ll have to keep drinking plenty of water and eating yoghurt, because I don’t want to let down one particular fellator: Sir Keir Starmer.

For weeks I’ve been listening to his sanctimonious crap about parties. I think we’d all welcome him shutting up for five minutes thanks to a mouthful of Boris meat.

And last? You, the British public. Wouldn’t shut up about Brexit, then the moment there’s a queue in an airport you’re moaning like bastards.

It’ll take months for you all to blow me but that’s not a problem. As you may have noticed, I’m not going anywhere.