Scotland acting like there's something bad about England again

SCOTLAND is once again acting like living next door to England under English rule is not an entirely positive experience.

SNP leader Nicola Sturgeon’s announcement of a date for a second independence referendum has offended the English by implying that sharing a country with them is less than thoroughly joyful.

Joe Turner of Dorking said: “It’s hurtful is what it is. What’s so great about independence that it’s better than being part of one big happy family with us?

“I’m still not over Ireland wanting their own country and laws and all that, which they clearly considered more important than our feelings. The selfish bastards.

“And France? We save their arses in two world wars but when it comes to handing us governance of their country, which would have been a nice thank-you, it’s all ‘mais non monsieur’.

“Now it’s Scotland, which barely even counts as a place, acting like England’s some kind of bully just because of our long history of killing its people and rulers and making it follow our laws.

“Well we were going to give you independence as a surprise present for being so good, but we’re not now because you’ve been rude. No referendum for you.” 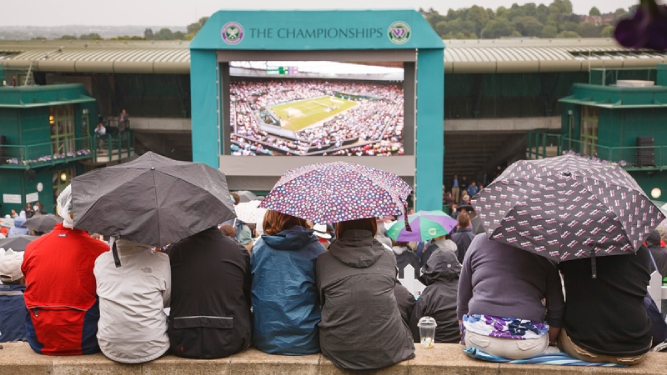 BRITISH people ignore tennis all year until Wimbledon rolls around, but why? These are the real reasons behind their fickle obsession:

British people don’t really like queuing, do they? Wrong. They f**king love it. The line waiting to get on-the-day Wimbledon passes is even officially called The Queue in recognition of this tragic fact. Our nation of mundane freaks finds camping out for tickets more enjoyable than actually watching tennis, although to be fair it is about equivalent in entertainment value.

Britain’s still firmly entrenched in the class system, meaning the plebs enjoy any opportunity to dress up and pretend to be the aristocracy. That’s why they’ll happily rinse £600 on a good seat at Centre Court and a rip-off bottle of champagne. Genuinely posh people never pay for this shit because they see it on telly for free.

Being hung up on tradition

Why else would you endure a Cliff Richard singalong? Where else would a hill with a view of a large screen be given a tortuously alliterative name? Why else would you pay £12 for a few measly strawberries and a dollop of cream? It’s all down to the Wimbledon ‘traditions’, which are pathetic. It’s hardly Christmas, is it?

Pretending to be experts

British people are tedious know-it-alls, and they especially love it when they can be armchair experts about something that’s happening in their own country. ‘Swiatek’s racquet definitely touched the net before the point was over’, is the sort of thing they’ll thunder for two weeks, before going back to not giving a f**k the second the trophies are handed over.

Enjoying being the underdog

Forget tennis, forget football or cricket, being an underdog is the UK’s national sport. And nowhere is the country less likely to triumph than at Wimbledon. That’s why spectators ironically shout ‘Come on, Tim!’ at whichever Brit is playing: it’s a defeatist’s ironic battle cry. Andy Murray’s wins don’t count because he’s Scottish.