REMEMBER me? I’m the guy that overwhelmingly won the moral argument in 2017 and 2019. And now you’re living in my 1970s heaven. Let me show you round:

The supply chain’s broken down and there’s less than ever on the shelves, which is great news for Britain. Less consumerism means less capitalism means more socialism equals win. You never needed all that fancy imported pasta. What your soul really craved was an allotment.

The three-day week? Long evenings spent reading by candlelight? Petrol strictly rationed? We never had it so good. Collapsing energy companies mean those days are back, and our nation will once again wear thick hand-knitted jumpers while going to bed at 7pm. From such fertile loam communism grows.

Of course the Tories have put up tax. While I sit back wisely and shake my silver head in amazement, they steal every line of my brilliant manifesto. Whatevs. Anyway, tax rises are wonderful and pay for public services, and soon all services will be public because they’ll be privatised to stop them going bankrupt. The state will be all.

Confessions films back in the cinemas

Power cuts will send a pornography-addicted nation back to cinemas for the plump breasts and leering laddishness of Robin Askwith’s classic Confessions films. British cinema will be revitalised by new Confessions films, starring Ben Whishaw, Florence Pugh and Anya Taylor-Joy and directed by my pal Ken Loach. I will make a cameo as a night watchman.

Inevitably our underpaid HGV drivers and care workers will strike, because there’s a labour shortage and they now hold the upper hand. And they won’t be the last. Soon the whole country will be paralysed by striking workers from every walk of life and I’ll be at the picket line with them because I live for this shit. So glad we left the EU. 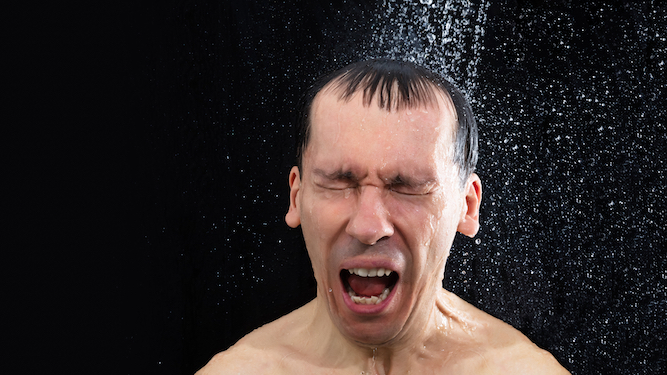 HATE mornings? Want to extend that feeling to the rest of the day? These tried-and-tested methods will ruin the whole week:

Alarm out of reach

Too easy on the snooze button? Pop your alarm on the far side of the room and you’ll wake up wanting to travel back in time and murder your past self. There’s nothing like stubbing your toe stumbling across a dark bedroom and knocking your still-ringing phone down the back of a chest of drawers to f**k everything up.

Planning to go for a run ensures you start your day guilty as shit as you decide the weather’s a bit iffy and linger over a third bowl of Coco Pops. So you set your alarm even earlier the next day, determined to put things right, and don’t go then either, and the cycle of self-hatred rolls on and on.

Many of the world’s masochistic Nordic peoples swear by cold showers to get the blood pumping. You’ll scream higher than a fox getting laid and spend the day with unrinsed shampoo in your hair because you could not stay under a second longer.

Meditating is a game of chicken with sleep at any time, and dangerous fresh out of bed. If you’re still in bed, repeating your mantra lying down with the curtains closed, you’ll surface to find you’ve missed your train, all your morning meetings, two lunch dates and picking up the kids from school.