IF your bin goes uncollected or your train is cancelled, Britain demands those responsible are shot as communists. If these non-key workers withdraw labour, nobody gives a shit:

There are memes all over the internet because knobheads make them for free. Some of them are even funny. So nobody would miss, or even notice the absence of, the embarrassingly try-hard ones from the official Westlers Hot Dog account. No, not even when you start a shit flame war with the Captain Birdseye account.

With roles that  involve following an algorithm while high on machismo and cocaine, brokerages are an adult creche for corporate wankers. Society wouldn’t be lessened even slightly if they were to strike. It could help high-end gambling addicts realise they hit rock bottom years ago.

The labours of Hercules, if written today, would include ‘trying to get through to a human when calling a company’. Not that they’re any f**king help when you do. And they’re always ‘experiencing an unusually high number of calls’ so having no staff would make no difference.

HR walking out? Who will do bugger all when you have a problem with your boss now? You’ll only notice they’ve gone after a few pleasant days without bullshit emails clogging your inbox. Meanwhile they’re picketing the wrong entrance because they know nothing about how the business runs.

‘Better run this past brand,’ someone says, whenever anyone does anything. They’re emailed and never reply, as usual. It’s assumed it’s because they’re too busy earning £80k a year for a made-up role, but actually they’re all on strike for better pay and conditions. Perhaps they’ll never come back.

The head of the department’s already gone, so the rest of them call a wildcat strike to protest his resignation. A room in Whitehall is deprived of six civil servants throwing Wotsits at each other and writing reports Boris Johnson puts straight in the bin. Even Jacob Rees-Mogg doesn’t check these pricks are working.

At a conference, and other situations where having an affair is fine 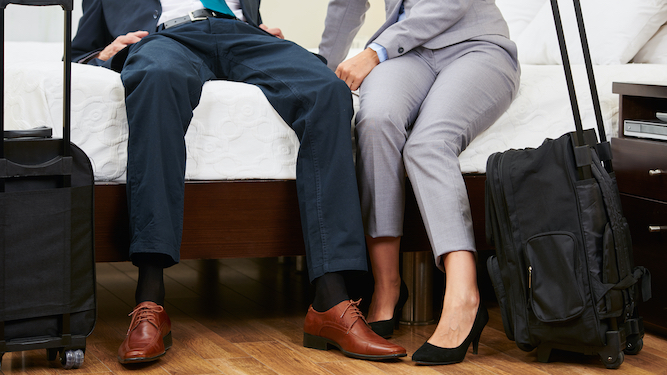 CHEATING is morally reprehensible, unless done in one of the following sanctioned scenarios. Serial philanderer Julian Cook explains:

What happens in Vegas, stays in Vegas and what happens in a Travelodge in Blackpool with a former backing singer for Tom Jones stays in that Blackpool Travelodge. It’s a hard rule, as I had to tell my wife when she found my spare phone with the texts from Eunice. It stays there, I said.

If you’re a high-flying executive jetting around the world, marital infidelity is pretty much part of the job. What else are you supposed to do while in Aberdeen for three days at a business symposium about recycleable packaging than shag an equally bored attendee? It’s practically on the itinerary.

Held to herald the beginning of a new marriage, they’ve a strong record of causing the collapse of one of the guests’ marriages. Wrongly. When will pedantic spouses learn that, after hours being bored by the groom’s father-in-law while clay-pigeon shooting, a blowie down a Rhyl back alley with a woman you bought four drinks for is perfectly acceptable?

At a music festival

Back in the 60s, Woodstock stood for free love and sticking it to repressive social conventions. As such, I think it’s a bit rich for anyone to complain when I strike up a vibrant, sexual connection with a fellow attendee at a festival, local church fete, farmer’s market, or primary school’s Summer Fayre.