FANS of Chelsea have announced they will retire a song mocking Steven Gerrard at the end of the 2018-19 season.

They admit their Gerrard chant, related to a 2014 error by the Liverpool player that did not help Chelsea in any material way, is beginning to show its age but if used sparingly can still do a job.

Chelsea fan Julian Cook said: “Sometimes I’ll be singing ‘Steve Gerrard, Gerrard, he slipped on his fucking arse’ in an away game and I’ll feel aches that were never there when we sung it before.

“It’s certainly lost some pace in the third line, because it takes a moment to remember who Demba Ba was, but it’s as intelligent as ever.”

The song, sung to the melody of Que Sera Sera, burst into football in April 2014 shortly after the Liverpool player’s inspiring slip that lost his club the league.

It has remained a loyal one-club song, refusing a £42 million offer from eventual 2014 league winners Manchester City, and has frequently carried an otherwise patchy repertoire by performing well regardless of opponents.

Cook added: “Steven Gerrard falling over is the best incident-turned-into-a-song of my lifetime.

“I’m tearing up at the thought of it going. It’s everything heroism means, to me.” 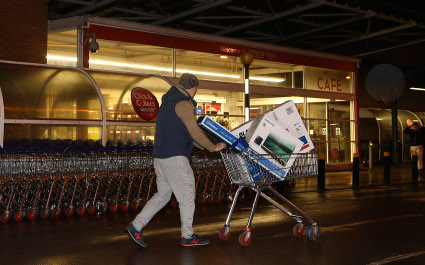 SCHOLARS have found that Dante’s epic Inferno contained a circle in Hell for Black Friday shoppers.

Aligheri’s classic 14th-century poem about a journey through the underworld details the “lost souls” who “seek the worldly and trample unheeding the spirit” for “a ‘chanted window of five feet to watch their fellow damned cavort.”

Literature Professor Helen Archer said: “Between the circle of the heretics and the region for murderers is one of the darkest parts of Hell, reserved for those willing to shove strangers over to purchase white goods.

“They are punished by queuing in darkness and driving, burning rain, whipped by demons in branded tabards and tortured by whispering that PS4s are only £119.99 at another shop but they’ll have gone by now.

“Dante continues: ‘And eternal is their weeping, their streaming eyes; at the hope of a Lenovo tablet for but a handful of change forever out of reach.

“‘Ah, the agonies they suffer all for no avail, for these same baubles are so often cheaper in other seasons.’”

But Black Friday shopper Wayne Hayes said: “If it’s eternal damnation versus £25 off a Nutribullet Pro 900 then burn baby burn.